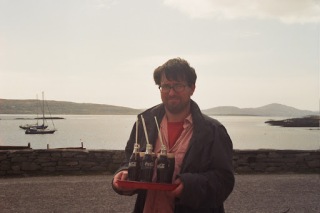 By way of a short introduction to the Sheep’s Head and Ahakista this is the text of a letter written about 30 years ago to an English family who were on their  way there for a summer holiday. Our cottage in Ahakista is The Cottage on the Pier which tells you all that you need to know about where it is located.

Dear Mr Thomas
The easiest route there from the South-East or South of Ireland is via Cork, and Westbound, on the Bandon, and then Bantry road. Some 4 miles short of Bantry, turn off for Durrus. Pass down through the village forking right at the bottom for Kilcrohane, along the coast road. A mile after Ahakista, take the only turn off down towards a fir-tree girt farm. Pass through the farm and continue towards the Atlantic. On arrival at the sea-wall bear a right up a gravel track and into the house forecourt preferably taking the last turn in low gear.
The Barry’s dogs will have heard you passing their farm, and Miss Carmel Barry will be right behind you with the keys of the house, and to show you the lie of the land.
If you wish to shop… nearer home and on the way there, and for local use are Cronin’s in Durrus. It is also the last petrol station before the house, and a few minutes in the company of Mr Gibb Ross in the bar adjoining the Post Office at the bottom of the village will be of assistance to your education in the locality. Please be nice to ‘Shot’ the Spaniel there.
In Ahakista, there are stores at Arundel’s and the Guinness pub, for local groceries when coming from the Durrus/Bantry. Fresh bread is delivered to the latter establishment thrice weekly.
To get to Kilcrohane it is necessary to take a double turn back onto the main road, and if you take your container, fresh cream may be obtained from the Co-operative creamery before 10.30 am at about 25p per pint. The Post Office/Stores, and petrol pump, are run by Mr John O’Mahony, who also doubles as landlord of the Dunmahon Hotel. The stores have a very wide supply of sundries and groceries, and much may be learnt from the Patron. The Sheep’s Head is O’Mahony country.
Bantry is the main shopping town, and the English papers, if you really want to see them, arrive in the shops in Wolfe Tone Square after lunch. The best delicatessen and groceries is Barr’s, opposite the Anchor Hotel. Whilst one shops, the other will be most welcomed by Mr and Mrs O’Donnell, and between them they can put you right on everything between the glass of Guinness in your hand and New Zealand which is almost directly beyond the bottom of the glass. Be kind to ‘Sam’ the Irish setter and see that he still carries an identity disc, but don’t be offended when you’ve read it. Bantry is not Deauville of Normandy from the gastronomic point of view, but the Anchor, and other places have good food.
Back at Carrigeen, you may wander and bathe with gay abandon. You should see Seals and Porpoises in front of the house and in the main bay. They are quite harmless. Your own mealtimes may be brought to your attention by the natives in winged form.
At the fir-tree girt farm lives Jerry Coughlin, who by your own arrangement will take you out in his fishing boat, or across to Carberry Is. The outboard motor broke down at Carberry Island last summer with a tenant on board. The tenant and Jerry set about repairing the engine and were soon an their way back across the bay. That tenant has since been negotiating a major aero engine contract in California with as much success.
Next door to Jerry’s house lives Mrs Bowen from whom milk, eggs, potatoes, and home made bread may be purchased by ordering.
Some of the bathing places are rocky, and some old form of footwear is recommended. A pair of good field glasses are essential to fully appreciate the local fauna such as Gannets diving for Sprats in the late evening.
Should anything serious go wrong, please telephone Captain Smith-Wright at Kilcrohane 17. The telephone has no night serviced from 10 pm. To 8 am. Doctor Abrahams is available if needed at Kilcrohane 15.
Yours sincerely
Donough McGillycuddy


The natives bringing attention to mealtimes are the gannets that gather in the air over the bay as the mackerel come in. They hang slowly in the air before plummeting a splash of white light into the water. Go out in a boat and try and park it with a line and lunch could be a mackerel straight out of the sea – best cooked over a wood fire on the beach.


Here are some random pictures to give a further flavour of the place. 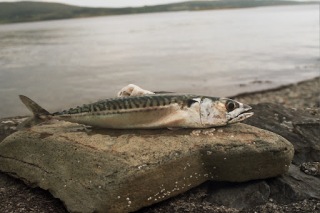 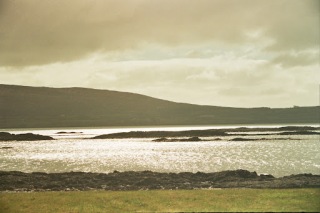 1 thought on “An introduction to the Sheep’s Head”