A trip down to Ward’s on Saturday morning to see what looks good. There are three bright silver dourade in the corner of the ice counter tucked below the monkfish. There are three of us eating and they look about right for one each. I know that we have tomatoes and lemons at home so all I need to pick up from the grocers is a bag of Cyprus potatoes. However I can’t help myself and buy another box of honey mangoes from Pakistan. They are only available for a few months over the summer and the boxes are stacked up on the counter of both The International Store and the grocers. I have started to collect the tops of the boxes, piling them up against one of the walls in the basement brightly coloured, they will look good for a party. There are four or five mangoes in each box, smaller than the hard, unforgiving monsters that fill the supermarket shelves, they are intensely sweet and slightly obscene as they slip around the mouth. 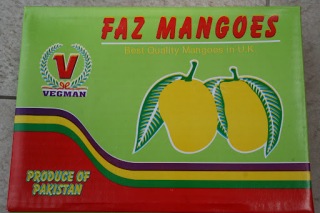 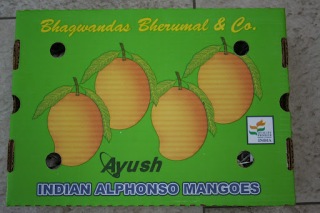 To cook the fish I peel and cut the potatoes into quarter inch slices and par-boiled them for 10 minutes. There was a red pepper in the fruit basket so I put that under the grill until it was blistered and black, put it to one side until it had cooled down and carefully peeled away the skin and scrapped away the seeds, keeping as much of the juices as I could.

To assemble I poured a healthy glug of olive oil into the bottom of a good sized oven tray and mixed in the potatoes with four squashed cloves of garlic. I put that into a hot oven for a few whilst I took the fish out of the fridge and wiped them down with a paper towel. I took the tray out of the oven and placed the fish on top of the potatoes and then scattered the red pepper and two quartered tomatoes around the fish. I doused with mored olive oil and then seasoned with thyme from the garden, a finely chopped dried red chilli,a good pinch of ground cumin, salt and pepper. That all went back into the oven for half an hour. Before putting it on the table I squeezed over the juice of half a lemon.

The potatoes were soft and had just start to roast up at the edges. The fish peeled off the bone and they fed the three of us very happily. Afterwards I sliced up three of the mangoes and we ate them with our fingers, the juices running down our chins.

For music I had been in the attic and dragged out some old records, Mary Coughlan singing I want to be seduced,  Galleon Drunk and The Band.