About 100 years ago when I was 18 or 19 I read some books by Richard Brautigan. He was an American writer, an alcoholic, who shot himself in 1984 aged 49. You could tell from the writing that he was almost out of his time and he had an unhappy life. Despite the apparent simplicity of his books, the almost haiku precision of what he wrote,  it all became too complicated and he finished it. I have most of his books at home on the shelves although I am still trying to find the old copy I had of Trout Fishing in America. His writing helped shape a mythical image of America I carried around with me at the time. I have hardly looked at them since.

I was reminded of one of his books at the weekend when I saw a pile of pale green watermelons in a box outside of the International Store on Oxton Road. £3.50 each they were too good to resist. They were vast and one was almost too heavy to carry in the white plastic bag they put it in. The kids wanted to play with it in the kitchen, carrying it around and threatening drop it in a great pink mess of watermelon flesh and seeds on the stone floor.

We ate it that evening after a barbecue sliced into great chunks. The seeds were still small and we ate them seeds and all the juices slathering down our chins and in my case sweetening my beard. The taste brought back memories of camping holidays in the south of France and eating them outside the tent and then I was reminded of Richard Brautigan and his gentle elliptical books 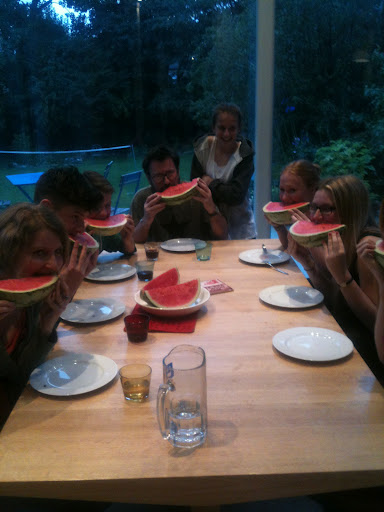