Someone asked me today if these are all my own posts – even the one about being on a boat in the middle of Dunmannus Bay. I explained that they were but I understood the question. There is I suspect a variance in tone and subject – interjections of music, the food I might be cooking over an evening and reflections on cheese and time spent at the Cottage. Sadly those are things I would rather be thinking about in the middle of the night when the shortcomings of the day come stealing up to keep me awake.

So reflections on cheese.

I got excited on Monday when I found on the shelves of an Oxfam shop two goods books about cheese. The first was a Dorling Kindersley book on French Cheeses by the French sounding Kazuko Masui and Tomoko Yamada. I suspect it is not the definitive book on French cheese and you would look a bit of a dork clutching it around the food stalls of a French country market but it covers at least 200 different types of cheese and there is a good colour photograph of each of them, there is along list of contributors at the back from France and as an introduction into what is there (and a bit of loo reading) it works well.

The second book was The Great British Cheese Book by Patrick Rance. A substantially more serious proposition and one that is going to take longer to get to grips with. There are no photographs and the only pictures are hand drawn maps to show the locations of the producers and drawings of the country where some of the cheeses are made, the cows that produce the milk and the equipment used in the process. I put Patrick Rance into Google and quickly came up with this obituary from the Independent in 1999:- 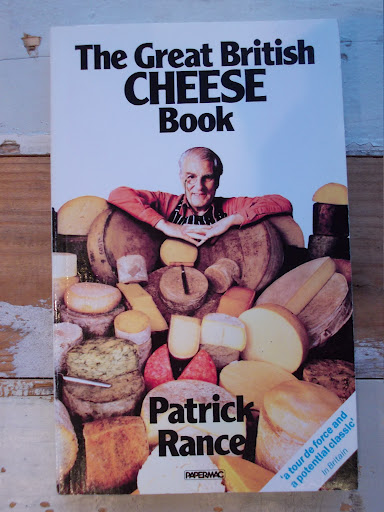 I had unknowingly managed to find a book by the father of modern British cheese. I have not yet got past the opening few pages and his start on the sad diminishing and slow revival of Cheddar cheese  and have in the meantime been waylaid by the other book that I bought that day being a PSmith novel by P G Wodehouse – another character wearing a monocle. But in the meantime I thought it worth sharing a couple of short extracts from the Preface.

If human perfection truly springs from the happy coincidence of duty with pleasure, then good cheese can make momentary paragons of us all. Cheese is economical and healthy in its concentration of rich natural nourishment, and has the quality, unique amongst palatable foodstuffs, of actually protecting the teeth. By playing endless variations on the theme of texture, flavour and aroma it also has the versatility to cater for almost every palate. These virtues, combined in no other single form of food, make the eating of cheese a dietetic duty of incomparable delight.

From the 1930s, I can recall a pub garden of Rupert Brooke’s Grantchester and my first pint of hoppy beer, set off to perfection by a tangy descendant of my childhood Cheddar. I relished it then as I have relished it ever since.


The book is more than twenty years old and I have no doubt that large parts of it will be out of date and I suspect that if he was doing it now the long list of useful addresses at the end would be shorter. But flicking through it I can pick out the same tensions between the desire for an older, better product and world’s desire for something more convenient, easier and cheaper. A conversation that can be had with anyone trying to produce good honest food today.

The book has hardly been opened and smells of good tobacco. Reading the obituary I remembered that I had lunch a few times many years ago in the Wells Stores in Abingdon with Diane Bowdler and I never really knew it was there.