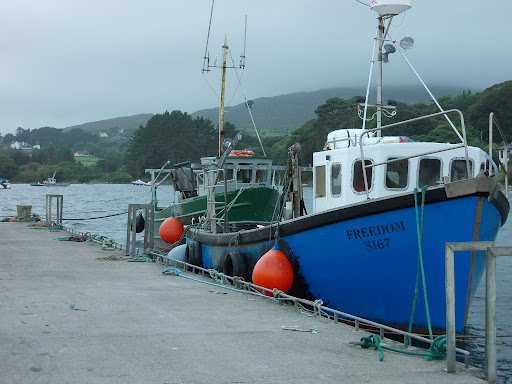 We had lobsters last night for supper, four of them from Tommy. He dropped them off in the morning in a SuperValu bag and I kept them in the salad box in the bottom of the fridge in the garage until I was ready to cook them.

To cook them I filled the large metal pan with sea water and brought it to a rolling boil.  I then took out the box from the bottom of the fridge and brought it into the kitchen. The kids crowded round to watch as one by one I picked them up and dropped them head first into the water. One of them twitched and boiling water was splashed all over the floor.

I left them for 20 minutes by which time the water had come back to the boil. I took them off the heat and fished them out onto the side. Taking a large heavy kitchen knife I split them and cracked the claws laying each half into a large bowl.

Whilst I was doing that I melted half a pat of butter with chopped garlic and salt and pepper.
Once all the lobsters were split and in the bowl I poured the melted butter over them and brought the bowl to the table.

We ate them with our fingers, sucking and slurping at the shells until our hands and faces were slick with them and their juices.  We used small metal picks to tease out every last morsel of meat. Some of best nuggets come from the small round piece of shell that connects the legs to the body. Twist them off and ease out the piece of white meat inside.  It may hardly be a mouthful but it is sweet and good.

Listening to Candi Stanton before lurching up to the Tin Pub for too many more pints of Murphy’s and dim memories of us all dancing with our famous neighbour to It’s a long way to Tipperary!