Skip to primary content
If you have 20 minutes to spare and a bowl full of cooked shrimp in the fridge you could do worse than use that time to peel the shrimps and pot them with melted butter.
The shrimps had come from Tommy on Monday. The season for them has just started.  Over the weekend his boat had been criss-crossing Kitchen Cove laying the pots edging gently close to the rocks at low tide. Orange buoys now dot the water and the bottom of must be dense with the blacks pots and line.
The cove is fed by a number of streams that come down from the hills including Akakista stream that runs between Arundel’s Pub and the big house. The fresh water, particularly if there has been heavy rain, makes the shallow waters of the cove brackish and brown.  In August the waters warm up and create a bloom of the tiny organisms on which the shrimp feast and grow.
Tommy’s boat came in at around 3.00pm and I wandered down the pier to see what he had. He was putting four blacks trays of shrimp into the back of his van. He sold me a kilo for 10Euro shoveling them into a plastic shopping bag with his hands.  Plastic bags have become an important currency on the pier now that they have been banned. It is a good idea to keep one in your pocket so it is to hand if a fisherman comes in with boxes of something he is willing to sell.

I put the bag of shrimp on the side in the kitchen and took a metal pan down to the rock pools to fill it with salt water. This only took a few minutes to come to a rolling boil. I put the shrimp into the sieve and from that poured them into the pan of boiling water. 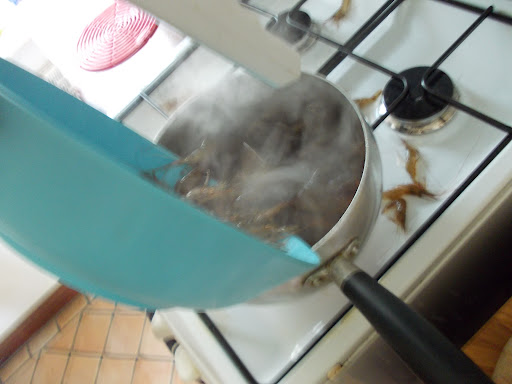 Some of them twitched to get away and fell onto either the oven or the floor and had to be picked up quickly and thrown into the pan.  Thirty seconds later they were done to subtle pink and I drained them in the same sieve they had just come from and left them to cool.

We had some that evening with homemade garlic mayonnaise sat round the table on Curly’s Corner the sun going down peeling off the hard shells to the small nibble of pink flesh underneath.
The next day most of the shrimps were still in their bowl in the fridge. Late in the afternoon there was a cool edge to the wind although the sun was still out. I took the bowl of shrimp outside and spent 20 minutes peeling them

Back in the kitchen I packed the peeled shrimp into two small glass bowls and melted a pat of butter in a small metal pan. I ground up half a teaspoon of coriander seeds with a clove of garlic, sea salt and a few shakes of smoked paprika all wetted with a drop out of a bottle Pernod and plenty of ground black pepper. This was all poured equally over the two bowls of shrimp and they were all put in the fridge to cool.

An hour or so later I made some toast with some of the old bread from the bread tin and smeared them with the potted shrimps, the butter melting into the hot toast.
We ate them around the fire on the beach