Back home from Ireland with a fridge full of cheese and sausage. The next post should contain a more detailed list of what there is.

We motored out yesterday after lunch to catch mackerel. There were three or four boats in the water on the point off Owen Island.  The sea was unsettled and the boat unsteady in the water and I thought that we would come away with nothing especially when the lines became caught under the boat. But then the lines tightened and pulled under the water and the mackerel started to bite. We just allowed the boat to drift in the wind until it came into the lee of the island.  in that twenty minutes we caught 12 fish and those were the ones that we kept. We could of easily had had twice that number.

A few days previously the talk in the pub had been about the lack of fish and how the torrents of rain over the previous two months had put too much fresh water into the bay. they were right about the rain. Even in the middle of the bay the water had a brown peaty look to it. But we had caught plenty of  mackerel with there not being a day when we came back with an empty bucket.

After gutting the fish I left three in the fridge for Dad to have for his Sunday supper. I smoked the rest to take home to eat on Monday evening. By this time it had started to rain, a thick unrelenting drizzle which made packing over the afternoon easier.

That evening we ate in Arundel’s and then walked in the dark and rain to The Tin Pub. The walk is only a few hundred yards but the trees close round the road at night plunging it into almost total darkness. As you walk you could be convinced that you are about to to be lost in the night. The effect is heightened in the rain, all the wet pressing the vegetation ever closer around you.

The pub was quiet for a Saturday night. Cora played card tricks with another girl behind the bar. As we finished our first pint our famous neighbour came in. Without the music and people we got into talking and were able compare journeys across the country to get to Ahakista.

There were slow heads in the morning as we packed the car. It had stopped raining by then but the ground was sodden with what had come down in the night. The water was as high as the night we had arrived and the same holes in the pier gurgled and plopped with the flow around the the slipway. 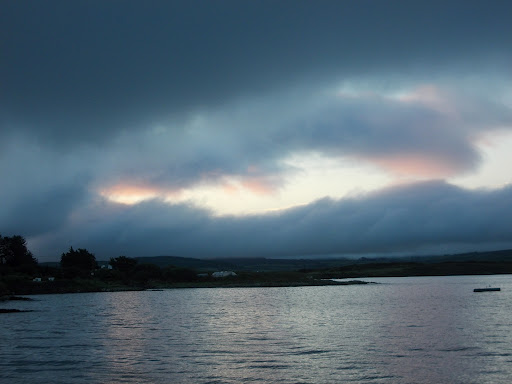 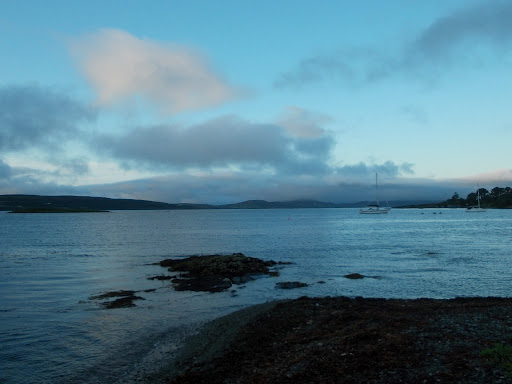 The fishermen had yet to leave the pier and the gulls seemed to stalk it more confidently as if the start of the fisherman’s day somehow diminished their hold over the territory. Maybe they were waiting for us to leave. 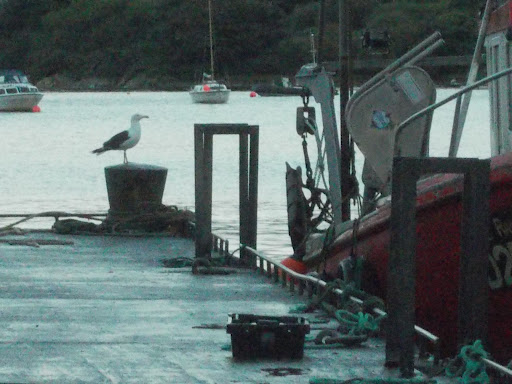