Music and the listening of it has been a part of my life for far longer than the food, tracing its fingers back to the records I managed to find at home amongst the James Last – even if it was the soundtracks to Hair and Jesus Christ Superstar. Soon after that it was T-Rex and then Blondie, by way of Queen, and then the whole gamut of all I could listen to. 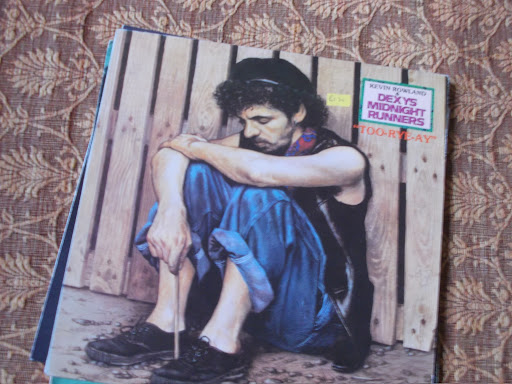 REM and Tom Waits have played a big part in all that and if you were to put me back in that room and ask what concert I would like to be transported back to it would have been either REM at Warwick University in 1984 or Tom Waits a year or so later at the Dominion Theatre on Tottenham Court Road.

I never really got Dexy’s Midnight Runners the first couple of times round. I liked Geno and I knew that Searching for the Young Soul Rebels was good but it never quite made it. Come on Eileen was just too ubiquitous. Don’t Stand Me Down came and went until I started to pick up the odd word on just how good it was. Rather to my surprise I came across a copy of one of it’s re-issues in the racks of CD’s in an HMV so I bought it to see what it was like.  At first it just sounded like a slightly muted version of what I had expected then one day I listened to it in the car and found myself going back to to the beginning of This is What She’s Like again and again and slowly they started to make sense.

I just missed them when they played at the Royal Court in 2003 and since then it has been a slow wait whilst they, Kevin Rowland, sorted themselves out to make some more music. Five or six years ago there was a hint on a MySpace page of what was to come as a demo of a song called Its Ok Joanna leaked out. It was seven or eight minutes of half spoken song over a simple piano melody and sat one night listening to it on the stunted speakers of my laptop it was devastating. It was difficult to understand how a song as good as that could be stuck in the tight limits of a MySpace page.

Of course this year we have had the triumph One Day I’m Going to Soar. I bought it the day it came out. We were in Edinburgh  and a few days later we drove back home. I listened to it in the car all the way back and the songs and the story started to latch their way into the back of my mind.

They played last week on Sunday evening at The Phil. We were sat in the circle, too far away, but able to watch the whole thing properly unfold. The first hour was a straight play through of One Day I’m Going to Soar – the sound fuller and more rounded than the album. That got a standing ovation. The second hour was  a truncated tour of some of the back catalogue. There was a slight nervousness as they started on Come On Eileen but they dragged it back from the teenage discos  and turned it into a fifteen minute finale. Except it wasn’t the end. The band came back on and Kevin and Pete Wiliams started on the studio banter that then gave way to This is What She’s Like.

There were a few minutes towards the end  when it seemed as if all my years of listening and enjoying music had come crushing down to Kevin Rowland hunched down at the front of the stage telling us this is my story  as the music drove on. It was a brief storm of emotion before the evening moved on and we had to go home.

Those few minutes have stayed with me all week. A large part of Dexys music, and the concert last Monday, is about redemption, telling it as it is, and finding something better out of the mire we tie ourselves in….and we all need a bit of that in our lives.