In 1897 Walter Garstang MA. FZS late Fellow of Lincoln College Oxford set about an investigation of a mackerel’s stripes. He was interested in trying to establish if there was a difference between the populations of mackerel that swarmed through the seas off the coasts of Ireland, England and the United States. He satisfied himself that mackerel taken from American waters differed from those taken from around Europe. Although he was able to describe an Irish race and an English race from Channel and the North Sea the differences in the fish taken from European waters were too slight to be significant. 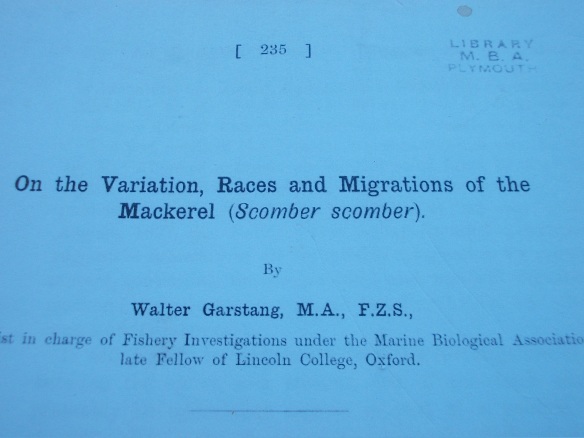 His investigation is perhaps more interesting for his describing of how the fish he eviscerated came to his laboratory in Plymouth and his conclusions as to whether a mackerel could be sexed by its stripes.

As to the source of fish he collected a sample of 1,500 giving instructions that specimens should be forwarded fresh (but damp) by post, if in small quantity; or in seaweed or ice by train, if in quantity. They came as follows:-

October 1897 an excellent sample of 100 fish from Newport, Rhode Island conveyed from New York to Plymouth in the refrigerator of an express steamer of the Hamburg-American Line.

From Brest another 100 fish caught by hook and line and forwarded on ice direct to Plymouth.

Several hundred fish from each of the following regions: the west and South coasts of Ireland, the English Channel, and the North Sea including two Irish consignments dated Kinsale, July 30th and September 3rd, 1897 caught with nets off the Old Head of Kinsale and forwarded by a Mr James Carroll, fish merchant.

He acknowledged that the visera of the fish from Brest and some of the Irish samples were so rotten owing to the delays in transit that it was not possible to record their sexual condition.  One imagines that Mr Garstang had few if any friends at this time.

I first came across the suggestion that mackerel could be sexed by its stripes in a book about British food I was leafing through in a shop. As usual I looked under mackerel heading to see if there was an interesting recipe; there wasn’t, but in the description of the fish there was a bald assertion that it was possible to tell the difference between the male a female fish by the shape of their stripes.

This sounded too good to be true. When we pull them out of Dunmaanus Bay they all look the same. Some maybe bigger than others but the stripes all looked the same angry black scrawl across their backs.

I put the book down but the comment stayed with me and over time I tried to find if there was any truth in the suggestion. I was eventually able to trace the story back to a book by Edward Donovan (1768 – 1837) The Natural History of British Fishes published in 1808. I have not been able to track down a copy of the original book but 40 years later he was quoted in Yarrell’s History of British Fishes as having said “the males have these dark tranverse bands nearly straight; while in females these bands are elegantly undulated.” No further clue is given to the source of the this statement but it would appear to have been taken up as curious remark to be idly included in any short essay on mackerel.

Having examined his 1,500 fish one of the first conclusions Garstang came to was that there is no truth in the tale that it is possible to distinguish the sex of mackerel by the shape of their bars.

Subsequently I put thequestion to Bruce B. Collette, PhD, Senior Scientist, NOAA Fisheries Systematics Laboratoryin the US, who told me by way of a late night email that so far as he is aware there is no scientific data to support the idea that male and female mackerel can be distinguished by differences in their striping. In fact most species of pelagic fishes, including tunas and mackerels of the family Scombridae, show no external differences between the sexes. The dolphinfish is one of the major exceptions to this rule.

Having acknowledged all that it is difficult to think of mackerel as anything else but a male fish. Out of the water and caught in the hand they are nothing but erect and tumescent straining against the restraining clasp.