Earlier in the week I mentioned that I had picked up some bags of Moghrabia from a middle-eastern food shop on the Cowley Road in Oxford. You don’t see Moghrabia very often in your local Sainsbury so if I spot some bags on a shelf I like to stock up. Earlier this year I bought five kilos from a shop on Edgeware Road.

I first came across recipes for Moghrabia or Moghrabieh in the first Ottolenghi cookbook. It is also known as giant couscous and that is basically what it is, made out of durum wheat and water and dried to a small hard nut. Like couscous it is a food of the Middle East but it features in cooking along the North African coast.  You are most likely to come across recipes for it books of Lebanese or Morroccan cooking.

Shortly after I was given the Ottolenghi book for Christmas we went to Australia for the first time and I came across Moghrabia on a menu in a restaurant in Melbourne. It was our first lunch in Australia have flown the night before over  25 hours in a plane. We had been up early and had spent the morning walking around the city in a daze. Bar Lourinha http://www.barlourinha.com.au/menu.php was the first mention in the guide book and although it was a further walk out of the centre we headed there for lunch.

It was mid afternoon by the time that we got there and and we took our seats at one of the high tables. Having had my curiosity piqued by the mention of Moghrabia in the Ottoleghi book I was obliged to order it when I saw it on the menu. It was served with a lamb stew and was delicious – small nuggets of forgiving pasta that took up the juices of the stew. When we got back to Sarah’s later that afternoon she told us we had been lucky to get a table at Bar Lourinha as it was normally packed at lunch time.

Back at home in England I was determined to track down a source for Moghrabia. On the internent I came acrss a site that specialised in Morrocccan food and was able to order a supply from there but it was expensive. Matta’s http://www.mattas.co.uk/on Bold Street would sometimes have it but only in small 500gr bags. So I was very happy when I came across the shop on the Edgeware Road that had countless bags of it on its shelves and even more pleased when I found it in Oxford last week.

I will have to speak to the people who look after The International Store on Oxton Road to see if they can get it in.

We had Moghrabia last night. I made one of the recipes I had seen in the Ottolenghi book – barbecued quail with mograbiah salad. I substituted the quail with chicken as I knew that quail would be too much to get past the children. It was all very simple. I started by making the marinade in a large heavy pestle and mortar. Cumin seeds, ground cinnamon, cardamon pods, all spice berries, tumeric, paprika and salt were all ground to a fine powder before I added garlic, ginger honey and olive oil. Once this was thoroughly mixed it was slathered over a chopped chicken. A vegetarian option was made by chopped aubergines and peppers being mixed with the same marinade. 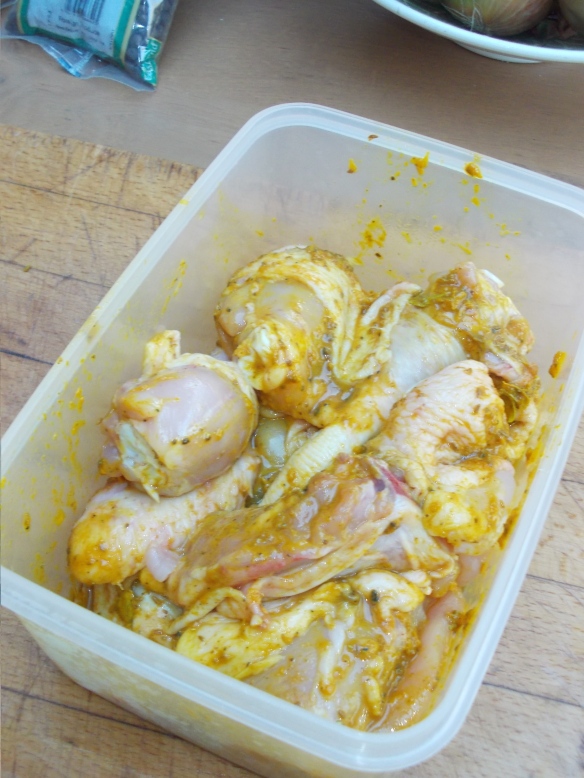 It is not necessary to cook Moghrabia. All it needs is to left to soak for half a day. The small hard nuts take up the moisture and expand, softening but retaining some bite. As an alternative you can boil them for a few minutes but you need to be careful not to overcook them.

Once we were almost ready to eat the chicken pieces went into a hot oven for 40 minutes. The Aubergine and peppers followed 15 minutes later. To make the salad I chopped some good handfuls of parsley and coriander which was then stirred into the Moghrabia together a good squeeze of lemon juice, the half dozen red tomatoes I had rescued from the greenhouse and more oilive oil. I heated this in a pan before we ate it with the chicken and vegetables.

There are still about 5 large bags of Moghrabia in the basement which should hopefully do me until I next come across it.