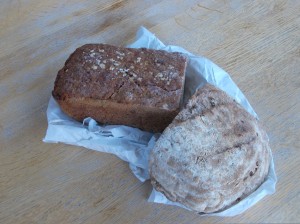 One of the small joys of The Bread Circle, along with the bread, are the notes that the makers send out to tell us about the bread we will eating that week and to provide a bit of insight into the bread making process.

Unfortunately my grasp of the technology is not sufficiently proficient to enable me to insert into this post a copy of some of the notes so I will set out some selected extracts below.

This week you are having what we laughingly call the “basic white”, but honestly there insn’t anything basic about it. Michael as usual was responsible for the preferment on Wednesday and he and Helen did the mix for Thursday am. The bake crew arrived to find 24 kg of dough bursting from its container and a request from Michael for 48 loaves…something of a record for us and largely due to eager new members who had sampled the bread on Sunday.

It was a good dough to work with, although as a 65% mix, a bit wetter than we’re used to, and with the newly repaired oven we were soon flying through the loaves.

We made a total of 75 loaves today and managed, even had lunch and were finished in good time. Michael had made the starter for the rye bread yesterday morning, Dave and Michael mixed the dough with the flour and water at night and soaked 2kg of sunflower seeds and 2kg of cracked malted rye (superb smell!), with the addition of a small amount of salt. They also mixed the starter for the malted wheat bread (about $kg of it) and all the dough/starter went into the airing cupboard for the night. Michael went to Tesco at about 5.45am to get some yeast from the bakery (and some lunch provisions for the baking crew) so we could add a small amount to make the bread rise reliably (it could take too long otherwise for the time we have set aside for the baking). The granary type flour has a lot of malted whole grains of wheat in it and a fair amount of powdered malt and the malt also provides good food for the yeast & sourdough bacteria in both varieties. Michael and Helen started mixing at 7.00 am (Michael had already oiled the tins and prepared a bit), the first rye loaf went into the oven at about 9.00 am, and the rye bread was baked at about 10.30. At 9.30 Dave came and we started preparing for the next phase, and at 10.00 with Fanis’s and Ellie’s arrival we started in earnest with the shaping of the malted wheat dough and the three of them went ahead with all this without Michael being required and we were finished by 13.30. we then had a good lunch and debated among ourselves whether the malted wheat had enough salt in it or not, and as one might expect we had as many opinions on this as there were people in the room.

I had some of the bread for lunch yesterday as a ham sandwich. The rye bread was good enough to eat by itself, no need for cheese and meat, although a small glass of beer would have gone down well. 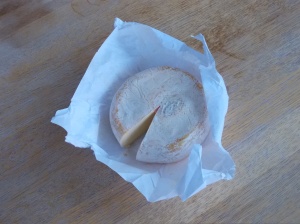 I was able to have the beer for lunch today as we finished the bread off with the cheese that is left in the fridge and some slices of the lamb left over from last night.

Listening to The Wrens and looking forward to The Unthanks this evening.

Thank you to Michael, Dave, Ellie, Helen, Janis & Steve for making the bread and the notes.