Normally when I go to the Farmer’s Market in New Ferry on the second Saturday of the month the chicken I buy from the stall on the right hand side as you go in is roasted for Sunday lunch along with dirty potatoes and carrots and a vegetarian alternative. You will have seen pictures.I have done something different today.

One of my favourite cookbooks is Middle Eastern Food by Arto der Haroutunian. He was born in Syria but ended up in Manchester  with a chain of six restaurants and two hotels. The book takes in all the cooking of the region including recipes from Armenia, Arabia, Israel  and Iraq. I picked it up in Blackwells in Oxford and have never seen another copy.

As you might expect there are three methods set out for the cooking of rice including a detailed run through of the 14 steps an Iranian housewife must go through in order to make a proper bowl of chelo, crusty steamed rice.I will be following some of the steps this evening. 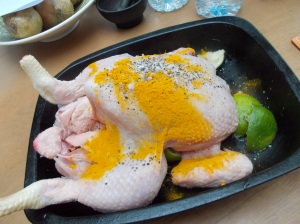 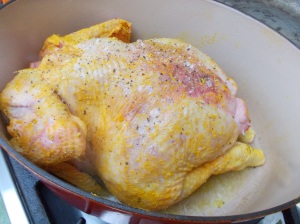 The chicken recipe is tashreeb dijaj whole chicken in a spicy sauce. Rub the chicken down with a quartered lime, then rub it down some more with a mixture of salt, pepper and tumeric. Your hands will be stained yellow. Heat butter in a large pan with a lid and brown the chicken. Addd a couple of chopped cloves of garlic, some split cardamon pods and two bay leaves. pour over a pint of water, bring to a simmer, put the lid on and let it cook on a low heat for an hour or so until done. For added sourness I threw in some dried limes I picked from the International Store.

Remove the chicken from the pan and keep warm, reduce the sauce, strain and pour over the chicken and serve with the rice.

For pudding we had the quince cooked in syrup with a whipped cream flavoured with calvados – deep dark and delicious. 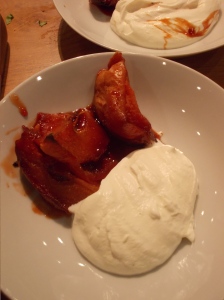 Cora had made a cheesecake during the afternoon and the kids ate that.

We continued to listen to the Soul Jazz compilation of Southern Rock.