One of the many advatages of being friends with Michael is you never know when you might receive an email explaining that a fox had got at his chickens and there was one going spare if I fancied having a go at plucking and then eviscerating it.

The email was answered for me in the affirmative. So when I got home late Thursday night after an evening spent drinking beer and listening to Plan B (The Oxton Music Group – a bit like a book club, but for men of a certain age some of whom have got beards and all of whom like drinking beer) I peered down into the cellar to find it hanging by its feet and a piece of string – head missing. 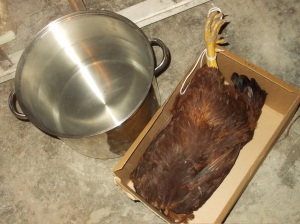 I put the thought of it out of mind all Friday until I got home from work and put myself to the task at hand. Michael suggested a dipping into a large pan of just off boiling water before setting out on the plucking. I though I would have more books on the subject but even Hugh Fearnley-Whittingstall was more coy than I expected on what to do. I was able to find some step by step photographs on the internet and they confirmed the bath in hot water which helps melt the fat under the surface of the fowls skin and so loosens the feathers.

So a large vat of water was slowly brought to the boil. I left it for a while and then took it down into the cellar to make a start. I lifted the bird off its hook and dunked it into the pot. The pot was only just big enough and I had to push in the legs so they were covered. There were a few alarming bubbles which I ignored. I counted to 60 and lifted it out  allowing the water to drain off. I placed it into a large cardboard box and got onto my knees to statrt on the plucking.

In the past I have plucked pheasant and pigeon and my abiding memory is the mess of feathers and the difficulty in avoiding torn skin. For this the dip in hot water worked well and most of the feathers were easy to pull out. The main problem being their sticking to my damp fingers and having to shake them. The feathers round the wing tips and legs were more difficult and I cheated and simply cut those off.

Fifteen minutes later I was left with the naked bird and aware that I was going to have to start on the  evisceration. Following Michael’s instructions I took a sharp knife and cut round its vent slowly making the hole bigger. I then gritted my teeth and started to work my fingers inside the gut. Luckily there were no eggs as  I found out the true meaning of the word furtle fingers pulling out gobs of yellow fat and the pink and slime of its guts. The smell of the farmyard rose up from the cardboard box and upstairs in the kitchen the cats’ noses twitched.

Once I had it all out I sluiced the bird down in a jet of cold water. It then went into the same pot but with clean water which I brought up to the boil and then left to simmer until I went to bed. Before going to bed I took the pot down to the cellar again to cool down overnight. The water will make a good stock and I will finish cooking the bird with some onions and a bottle of red wine for Sunday lunch.