Sunday morning breakfast is normally given over to bacon, HP Sauce and toast. But sometimes, especially after a Saturday morning visit to Wards, it is good to ring the changes and have a go at a kipper.

They had them from either the Isle of Mann or Craster. I chose a Craster.

I cooked it under the grill, a few dots of butter and ten minutes later it was on the plate.

A kipper is also sometimes known as a red herring. Samuel Pepys  had them on 28 February 1660 “Up in the morning, and had some red herrings to our breakfast, while my boot-heel was a-mending, by the same token the boy left the hole as big as it was before.” 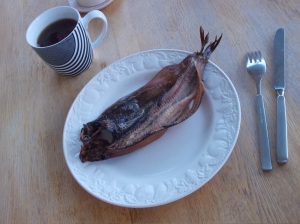