Baby sitting for youngest daughter and friend and having to go out later to perform the Friday night taxi service collecting from a sixth form disco.

I bought the partridge last week from Wards and put it into the freezer until needed. Tonight seemed like a good idea although it would miss the few glasses of red wine I would otherwise have had with it. 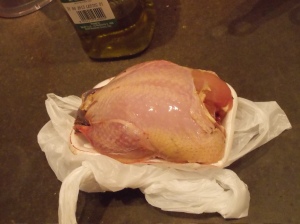 It was browned in olive oil and then put to one side whilst I sweated half an onion. A sugary caramel smell came off the pan and I remembered it was the same pan in which I had cooked two quince a few weeks ago in a mixture of syrup and water. Obviously I should have done better with the washing up but the sweetness would add some more depth to the flavour.

Once the onion was loose I threw in some finely chopped pieces of bacon and a few cloves of garlic. That all cooked through for a few minutes before the partridge went back in together with a slug of white wine vinegar, two slugs of white wine and a dash of water. I then added a pinch of saffron, two cloves, pine nuts and a couple of bay leaves. There was an old carrot and potato in the cupboard so those were peeled, chopped up and thrown in as well. The lid went on and it went for an hour. 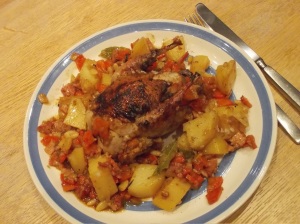 It was just right for a cold evening with the threat of frost in the air. Most of the liquid had gone taken up by the carrot and potato. There was a slight sweetness about it and the spice of the cloves and bay leaves. The partridge fell apart at the touch of the knife and there were bones to chew over.

The recipe came from a new book You’re All Invited  by Margot Henderson, the wife of Fergus. 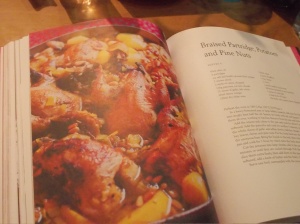 A Friday night at home means a visit to Probe. Through its various locations around Liverpool I have been buying music from Probe for about 30 years. We are just about on nodding terms. I got the new album by Viv Albertine and Julie Holter’s Tragedy.