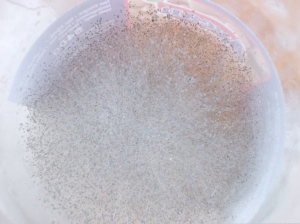 A quiet Saturday. The sky has been clear and blue for most of the day but now the dark is coming down and grey clouds are skitting over the horizon. It has been snowing elsewhere and who knows it is almost cold enough to snow here. I will be lighting the fire later.

We had chickpeas last week but I didn’t quite finish he jar. I should have put it in the fridge but I forgot and after a few days a light bloom of mould had starting to grow. A week later it is almost two inches thick, grey and dirty black at the end. Almost good enough to eat. I waited for light and the weekend to take a picture. It will seem a shame to throw it away.

On the trawl round Birkenhead I started at Wards. I had been meaning to get some halibut. I had not had it before and I had spotted a recipe in the Margot Henderson book I was cooking from last night. But my eye was caught first of all by some Red Gunnard that were considerably cheaper and then by a small Turbot. We are only in with the kids and it would be an extravagance but it would be great roasted whole and the kids will enjoy it. 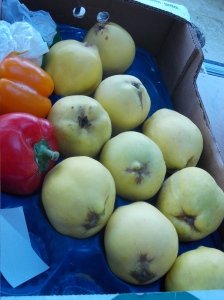 There were more quince in the grocers so I bought another ten to make some quince cheese. At home I unwrapped the Turbot and Tom looked on greedily the smell twitching his whiskers. 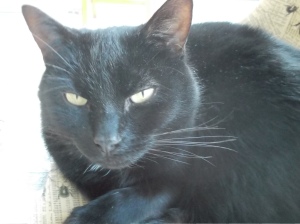 In the afternoon we went down to the Oxton Art Fair in The Williamson Gallery. Des was running a children’s workshop and in the corner a portrait booth had been built. I was sat down and five minutes later was given for a £ a small portrait that appears to have captured my furrowed brow. 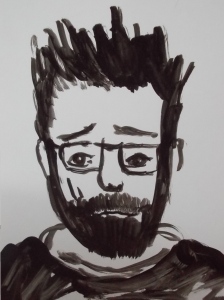 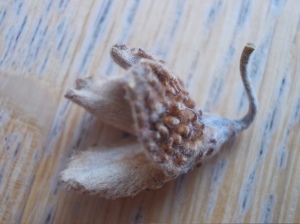 2 thoughts on “A portrait”