Another Saturday morning spent doing the rounds of Birkenhead. First off to the Wirral Farmer’s Market in New Ferry to pick up a chicken for lunch tomorrow and cheese for Christmas, a pound each of Mrs Bourne’s Clothe Wrapped Cellar Matured Cheshire and Mrs Kirkham’s Lancashire. 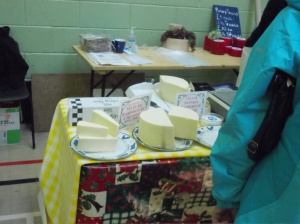 I will leave the cheese tucked and hidden in the back of the fridge to be brought out on Christmas Day to be eaten with the quince paste I made last week. I picked up a second chicken to throw into the freezer for next week on Sunday, we will have with preserved lemons and crusty rice.

A child’s choir was singing carol’s outside and it was busier than usual, there were people wearing Santa hats, almost enough to throw of the Bah Humbugs.

The back home for a cup of coffee before the journey to Birkenhead town centre. First sto was The International Store for a large tin of Virgin Olive Oil and to ask after a Saturday job for Galen stacking shelves. They will call back in the week.

Then on to Skeleton Records for a cheap but worthwhile gift to throw into the pot for the Music Group meet next week. I was pleased to find that they had almost all of Big Star’s backlog on CD although that then gave rise to the difficulty of what to choose . No1 Record or Radio City – eventually I went for No 1 Record – mostly because it had Thireteen on it – although in todays climate even owning it might get you arrested. Turned out the bloke behind the counter is a big Alex Chilton/Big Star fan. He had seen alex Chilton play in the Duchess of York pub in Leeds sometime around 1990. He’d spoken to Alex Cholton after the gig and found him to be quite friendly although that was perhaps by him confessing that he had named his son after him.

I confessed that I had only heard of Alex Chilton after The Bangles had covered September Gurls on the second album but I had seen him in concert playing as Big Star with Jody Stephens and two members of The Posies.

It was the longest conversation I had had in Skeleton records.

It was then on to Wards for haddock, salmon and to order the Christmas capon and a dozen oysters. Christmas is falling on a bad day for them this year with the weekend before disrupting the deliveries they would normally expect and the Sunday taking away a day of good trade. Simon complained about the odd orders that were phoned in at this time of year including  a lady who insisted that they should have a dozen razor clams for Christmas.

After Wards it was a walk back up the hill to the grocers where they had another box of quince so I can fill the house tomorrow with their smell as I boil them down. They had great bunches of dill and dirty beetroot. I will use that with the salmon. Kazim and I exchanged tales about quince and he told me how they grow in Iran.

After lunch it was out again to buy a Christmas Tree. we went to Church Farm sat on the side of the hill near Thurstaton looking out over the washed out colours of the Dee. Cora walked round the trees stroking her chin before we picked one and took it home. It is standing now in a bucket of water outside. We will bring it in and decorate it next week.

Now there’s a fire on the kettle is boiling for tea.

3 thoughts on “Chicken, cheese, Big Star and a Christmas Tree”