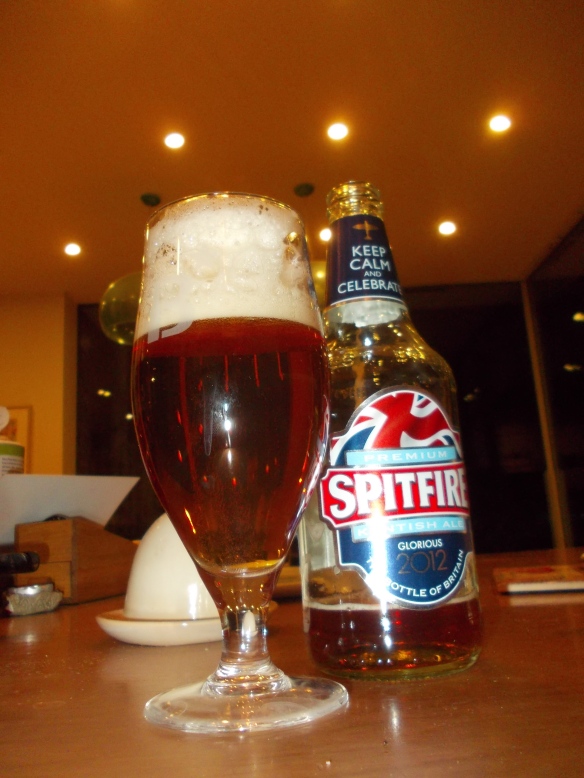 Going out to the Co-op on a cold, wet Sunday evening to buy some spaghetti for the tomato sauce which was the only thing we felt up to eating I added a couple of bottles of Spitfire to the basket as they were on offer (having said that Spitfire always seems to be on offer whatever supermarket I happen to be in).

“Its been going well the Spitfire,”said the behind the till.

I was tempted to point out that it was going cheap but instead I said, “Well its good stuff.”

“The other one I like is Bishop’s Finger,” he said,  “Brewed by the same people, Shepherd & Neame in Kent.”

I remembered drinking it almost three years ago to the day, eating fish’n’chips in The  Pilot Inn on the shingle banks of Dungeness under the shadow of the power station. The weather and sky was clear blue as we walked past the fishing boats pulled up from the sea by a rusty, collapsing group of tractors.

“Another one I like is Marston’s Double Drop. Some of the others are too heavy and the Badger beers are too fruity,” he said.

“What I like about the Spitfire is that it is light and the nutty taste,” I said as I passed over my money and we wished other goodnight.

Outside the rain was coming down hard as I hurried back to the car to go home and finish the cooking of  supper.