It is thick wet snow outside. The kind of weather that makes you feel you would rather not go outside again. Hopefully it will be gone tomorrow. I had been hoping it would be dry over the weekend and there would be time in the garden for a fire in the corner but whatever happens with the snow it will be too damp and the fire will have to wait until next week.

Last night Galen and I had a frugal supper. A pack of six sausages cooked in a pot together the tightly chopped ends of some chorizo I found lurking in the back of the fridge. I had to scrape bits of mould off but I figured that would add to the flavour.

Once the sausages had started to brown I added a chopped onion, some celery and then a finely chopped carrot. That was all left to stew in its fat for a while. I scurried down to the basement to find some cider. I knew I had seen a bottle lurking in a corner, French, use by date about five years ago. I think it must have come back from Normandy. The cork came off with a satisfying pop and I poured some into a glass. I tasted it expecting vinegar but came up with a mouthful of dry apples. A good glass of that went over the sausages and I poured a glass out for myself.

Over lunch I had been to Lunya and bought a jar El Navarrico lentils. Whilst getting them precooked is cheating and more expensive they are worth it. They have a dense earthy flavour and just the right bite. There also make a good glupping sound as you shake the jar to get the lentils into the pan.

We ate the sausages and lentils with the rest of the cider. 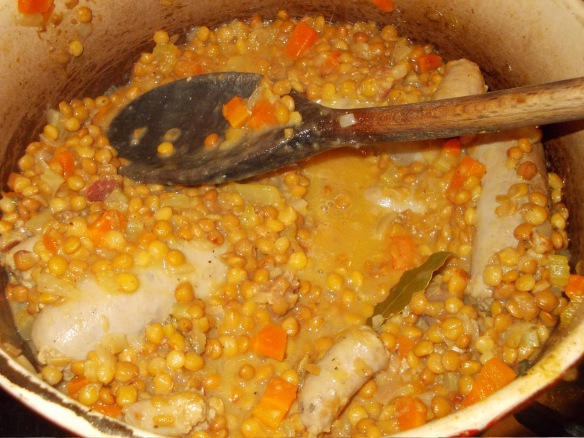