So after the post earlier in the week on dredging for scallops Hugh Fearnley-Whittingstall was on Channel 4 this evening talking about the exact same subject although he was talking about the seas around the Isle of Mann rather than the Western Isles. I thought he did very well diving amongst scallops the size of a good dinner plate without taking one back up to the surface for dinner

His recreation of a sea floor full on a life on the beach at Weston-super-Mare was effective especially when the tractors came to drag their gear over it demonstrate the sort of destruction that goes on hidden under the sea’s surface.

We are hopefully going to Ahakista for Easter (so long as kids can be persuaded that 5 days watching the rain come down with no internet will not be boring). We should be therein time for the end of the scallop season and if I am able to buy some from Tommy I will ask him about the fishing for them in the bay.

I can remember years ago being in Arundel’s one afternoon years ago. Mary was behind the bar and there was a man in there having a cooling pint of lager. He had come in a black van which was parked at an angle outside the pub. He was probably performing some errand further up the peninsula and he had called in to cool himself down for a while and to talk. He had a sharp quick voice and I had to concentrate to keep up.

For some reason the talk turned to scallops, the winter season for them and how best to cook them.

Mary said,  ‘I like to cook them on an open fire. Wait ’til the flames have died down a bit and put them there amongst the ashes. Put them in curved side of the shell down. They’ll open in the heat and the juices are lovely.’

The man left in his black van soon after. Mary said she had not seen him before. 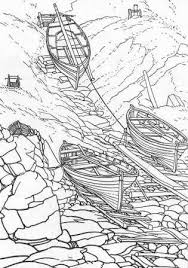 Late last night all I could post was a description of being out mackerel fishing by Peter Anson. I have picked up a couple of books by him in odd second hand book shops over the years. He writes about fishing and fishing men but the great joy of his books are the illustrations. Careful line drawings of boats and the men who sail in them.

He was the son of a rear admiral and became a monk. He lived his live trying to balance a love for the sea and a love for the church. He is perhaps more famous for his drawings of churches and their interiors but it is his books on the sea that I enjoy. There is intricate detail in his drawing of the rope and line, each in its place, the tied engines for an old sailing boat.

It is always good to have something in mind when you go into a second book shop. On the moment I keep my eyes open for the names Dorothy Hartley and Peter F. Anson.