He hauled a mackerel aboard, and, catching hold of the shank of the hook, flicked the fish into the bottom of the boat with one and the same motion that flung the side overboard again; and after it the lead. Wedging the mackerel’s head between his knees, he bent its body to a curve, scraped off the scales near its tail, and cut a fresh lask from the living fish. He is tender-hearted by nature, but now: “That’ll hae ‘em!” he crowed

The mackerel bit hotly at our new bait.

Before the lines were properly out, in they had to come again, flop-flop went the fish on the bottom boards as we jerked them carelessly off the hooks. Every moment or two one of them would dance up and flip its tail wildly; beat on the bottom boards a tattoo which spattered us with scales; then sink back among the glistening mass that was fast losing its beauty of colour, its opalescent pinks and steely blues, even as it died and stiffened.

Suddenly the fish stopped biting, perhaps because the rising sun was shining into the water. The wind dropped without warning, as southerly winds will do in the early morning if they don’t come on to blow a good deal later. The Cock Robin wallowed again on the water. “We’m done,” said Tony. “Let’s get in out o’ it in time for the early market. There ain’t no other boats out. Thees yer ought to fetch ‘leven-pence the dizzen. We’ve made these day gude in case nort else don’t turn up.’ 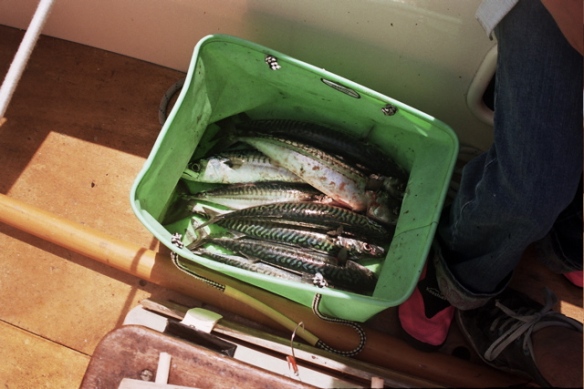