I shook off the rain and bundled myself into the pub. It was early evening and I was supposed to be making supper. The rest of the family were sat around the fire reading books or drawing and I thought that before I started on the cooking I should steady the hand with a pint and then perhaps take another down with me to slurp whilst at the stove.

It was a deceptive rain. Looked at from inside it did not look too bad. Heavy perhaps but not likely to soak you on a walk of a hundred yards. But once outside and on the road it was heavy and thick. There were sheets of water on the apron of the pier and the stream by the side of The Butter House was in full spate sending brown water over the stones down by the slipway.

I ran up to the pub without bothering to think on the walk back with a pint to keep still in my hand. The pub was empty but the radio was on, quiet music and hushed voices. I sat on one of the hard stools and waited watching the view outside.

Although it was summer the rain and cloud made everything grey outside. Grey apart from the black. It was so thick now you could hardly see the other side of Kitchen Cove and the rest of the bay was shrouded in mist. The lights were on on the pier. Their watery yellow was the only colour. The green grass and the trees, the reds and blues of the boats were all muted and shut down by the wet and the grey cloud.

An old red Royal Mail van pulled up outside the pub. The marking of The Post Office had been scrubbed away but were still visible on the side. A man got out and unhurriedly shut the car door and walked into the pub.

He looked surprised to see me. ‘Its misty out there’ he said. ‘You’ll not be walking back on a day like this.’

A girl walked through the door from the kitchen and stood behind the bar ‘Now what can I get you’ she said.

‘A pint of Murphy’s’ I said. She started to pour mine and then a second for the man. Once both pints were full she put them onto the tray to settle.

I gave her a note for the two pints. The man acknowledged the pint with a nod as it was put on a mat in front of him.

‘Are you here for the summer’ he said looking out at the rain. ‘Shit its been bad this year. There has never been rain like it. When did you get here. The weekend you say. Fer feks sake it has been better since then. It was dry when was it yesterday for a while but apart from that it has been nothing but wet and feckin’ rain.’

We both looked down at our pints.

The girl behind the bar, I’d not seen her before and did not know her name, she asked him ‘Did you hear when it might stop? It was on the radio before it might get better next week.’

‘It’s not going to stop now’ he said ‘It’ll be be wet for the summer.’

I could see that two of the children had got bored reading their books round the fire. They were walking to the end of the pier, one of them, the eldest carrying the long fishing rod we never use with the luminous line. When they got to the end he shooed his younger sister to a safe distance and unhooked the line. He stood still at the end of the pier and arced the rod back and forward again letting go of the line so that the hook and its weight sailed out an hundred yards or so or more into the water.

Although it was still raining it was still and the weight of the rain seemed to have flattened down the water. We could see the splash of it going in and the line pulled up tight as he started to wind it in.

‘What month is it now’ the man said ‘Is it August. August. Now the fish don’t like the fresh water coming off the hills down there into the bay. You can see it all now dirtying up the water. But they have a dilemma because it is good for the shrimp and if the mackerel don’t eat the shrimp then there’s squid that will do it and the mackerel well they will always eat the squid.’

The boy pulled in the line and it was empty. He shot it out again into the water. He did it another three times and we finished our pints and the man bought me another.

The boy’s sister wanted a go and they argued at the end of the pier. Eventually she got her way and was allowed a couple of goes. She couldn’t fling the rod from over her back but did it from her side the line travelling half of the distance. We could see the frustration in her bunched shoulders. The boy was laughing in the rain. She shouted at him leaving the line to trail in the water as she did so.

She started to reel it in again and as she did so the line quickened. Now she shouted for help and the two of them held onto the rod and he wound it in until the silver thump of a mackerel pulled out of the water and flickered into the light.

I took my third pint out into the rain and muttering  good night walked down to the pier to help them. 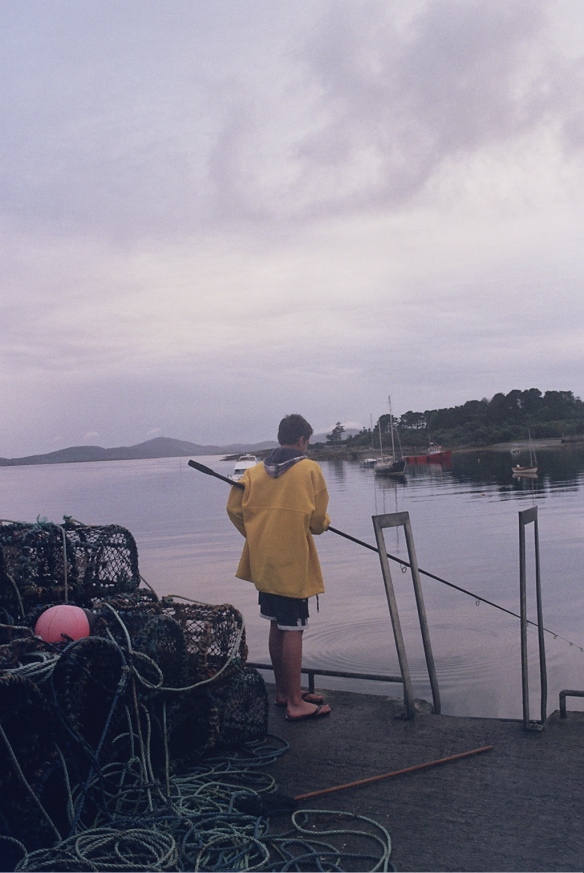 1 thought on “Fishing for mackerel in the rain”