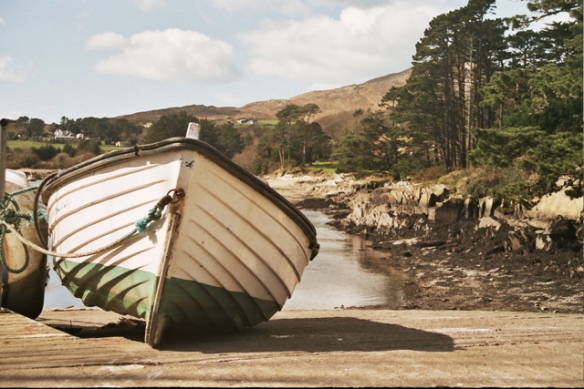 There are a number of books around the Cottage that tell of live on the Sheep’s Head and around West Cork and give some of the history of the place. This is an extract from one of those books Under the Shadow of Suifinn by Ann McCarthy.

My great grandfather had a Mackerel Seine which was made of cotton and was 180 fathoms long, and 18 fathoms deep at the bunt (the widest part). The seine was tapered at the sleeves (the narrow ends). At the bottom there was a row of lead rings, and the trip rope went through these. When it was wet, it took seven men to lift it to a field to be spread out, so it could be repaired. It had to be barked (dyed and treated) in a big pot that holds 120 gallons.

The net was stored in the room that I sleep in now. There used to by a hinged window to take it in and out. It was not uncommon to catch 6,000 fish in the seine at a time. The seine was transported in a seine boat, which was 27 feet long and 7 feet wide. It was rowed by six men, with a captain on the back at the tiller. In the stern was the man who watched for fish, and he also used the “thrash block” which was a rope tied to a stone and was used for directing fish into the seine.

The seine boat was accompanied by the “falter” which was crewed by four men. It was they who took the end of the seine from the seine boat when they saw a shoal of fish, and shot the seine around them. Then they helped to bail the fish which were floating on the surface into both boats. While they were waiting for the shoal to rise, they always said the Rosary. It was not uncommon to spend 12 hours during the night without finding a shoal. As Wellingtons and oilskins were unheard of the men often suffered from the wet. Their lamp was worked on fish oil and cotton wick, which was also used to light their pipes.

As there was no pier, the loaded boats had to be anchored a safe distance from the rocky beach. The crews unloaded the boats wading through three or four feet of water. The baskets of fish were put on large tables and the splitters and gutters cleaned them. Schoolboys took them to the river and washed them, after which they were brought back to the tables and packed in barrels of coarse salt. Approximately 120 big fish filled a barrel. Six months later a ship would come and the small boats would take the barrels out to the ship, which was anchored in the bay. The ship had a canhook (winch) which took three barrels at a time. the ships’ names were “Mary Audrey” and the “Princess Beara”. the fish was taken to North America. in a good season a fisherman would earn £70, the price for a barrel of fish being £1.7.6

A storm in 1940, which wrecked the boats and knocked the storing shed, finished this industry, with the help of the collapse of the American market.

O’Mahony is one of the local names and it is the name of the shop in Kilcrohane.