In 1897 Stephen Crane, the American writer of The Red Badge Of Courage spent three weeks in Ahakista staying with his fellow writer Harold Frederic. Frederic had been lent a house in the village. Crane had been living in London and given the somewhat tumultuous life he was living the time he spent on the Sheep’s Head may have afforded him some peace. He wrote whilst he was there and gathered material for his “Irish Notes” which includes something on mackerel. 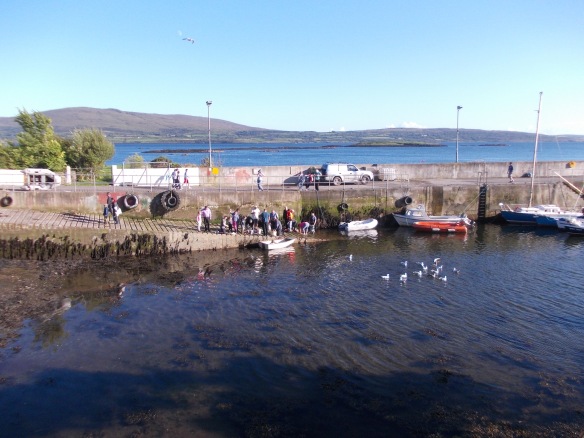 The brook curved down over the rocks, innocent and white, until it faced a little strand of smooth gravel and flat stones. It turned then to the left, and thereafter its guilty current was tinged with the pink of diluted blood. Boulders standing neck-deep in the water were rimmed with red; they wore bloody collars whose tops marked the supreme instant of some tragic movement of the stream. In the pale green shallows of the bay’s edge, the outward flow from the criminal little brook was as eloquently marked as if a long crimson carpet had been laid upon the waters. The scene of the carnage was the strand of smooth gravel and flat stones, and the fruit of the carnage was cleaned mackerel.

The donkey with his cart-load of gleaming fish, and escorted by the whooping and laughing boys, galloped along the quay and up a street of the village until he was turned off at the gravelly strand, at the point where the colour of the brook was changing. Here twenty people of both sexes and all ages were preparing the fish for market. The mackerel, beautiful as fire-etched salvers, first were passed to a long table, around which worked as many women as could have elbow room. Each one could clean a fish with two motions of the knife. Then the washers, men who stood over the troughs filled with running water from the brook, soused the fish until the outlet became a sinister element that in an instant changed the brook from a happy thing of gorse and heather of the hills to an evil stream, sullen and reddened. After being washed, the fish were carried to a group of girls with knives, who made the cuts that enabled each fish to flatten out in the manner known of the breakfast table. And after the girls came the men and boys, who rubbed each fish thoroughly with great handfuls of coarse salt, which was whiter than snow, and shone in the daylight from a multitude of gleaming points, diamond-like. Last came the packers, drilled in the art of getting neither too few nor too many mackerel into a barrel, sprinkling constantly prodigal layers of brilliant salt. There were many intermediate corps of boys and girls carrying fish from point to point, and sometimes building them in stacks convenient to the hands of the more important labourers.

On the top of the pier the figure of the melancholy old man was portrayed upon the polished water. He was still dangling his line hopelessly. He gazed down into the misty water. Once he stirred and murmured: “Bad luck to thim.” Otherwise he seemed to remain motionless for hours. One by one the fishing-boats floated away. The brook changed its colour, and in the dusk showed a tumble of pearly white among the rocks.

A cold night wind, sweeping transversely across the pier, awakened perhaps the rheumatism in the old man’s bones. He arose and, mumbling and grumbling, began to wind his line. The waves were lashing the stones. He moved off towards the intense darkness of the village streets.