On Monday we drove to Schull and parked by the old broken down church and graveyard on the Colla Road. On the wall around the graveyard Cork County Council had put up a sign warning against the dangers of illicit digging of graves. The sign made it clear that the Council would accept no liability for any injuries caused by grave digging activities and that for the avoidance of doubt this included those engaged in voluntary grave digging.

Helpfully guidance was given as to how one should go about having a grave dug and who one needed to contact for the digging of a lawful grave where there would be no danger to life and limb.

Inside the church rubbish had blown in with the wind, and trees and ivy grew through the rusted metail railing that made up some of the old graves.

We moved on from the pier down the road and the sea and the stretch of water that separated the mainland from Long Island. As we turned the corner to start walking along the coast heading west the wind was behind us cold and blustery. The water was choppy and grey and the white houses that clustered on Long Island looked alone and somewhere away from the world.

At Colla Pier there were a few boats which had a collapsed look about them beaten up by winter and the weather waiting for the heat of the sun. They were streaked with brown and the colour was bleached out of them. We followed the walk round cutting back through the hills. In their shadow some of the force of the wind was diminished but as we got to the top of the hill overlooking the church and Schull harbour it came at us in full force blowing the air out of our lungs. The harbour was empty of boats. At one point I looked back and through the shadow of the hills there was a glimpse of The Sheep’s Head grey in the distance.

We walked quickly down the hill and bundled into the car to be off for lunch. Hackett’s was open and we sat down at the large table opposite the bar and set about ordering our food as pints were poured and bottles of Coke put on the table. I have been to Hackett’s a few times over the years and somewhere I have a t-shirt to prove it. I don’t think I have ever seen the same person behind the bar but whoever it is they seem to own the place and there will be a conversation about the night before and how late it was before the doors were finally closed.

There was a sign behind the bar spelling out the opening and closing a times over the Easter break “We are open when the door can opened otherwise we are shut.” The barman wore a very fine Captain Haddock t-shirt and I was tempted to ask him where he had got it from. 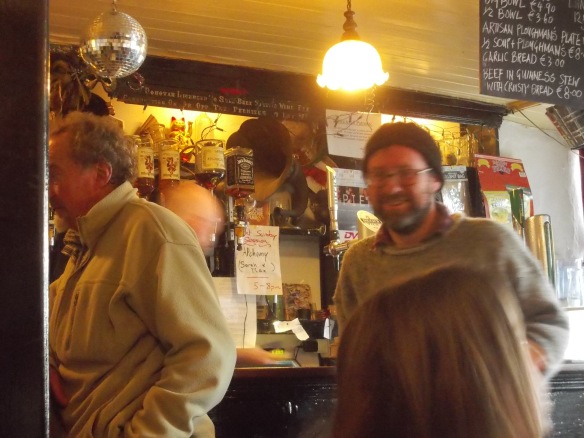 The food was a good if not better than ever. I had a BLT sandwich made with thick slabs of Gubbeen bacon and a great pile of salad. The others had bowls of soup and toasties and in the case of one another bowl of soup as he was still hungry. Two of the children did not want there salad so I ended up polishing off three great portions.

Having finished lunch we spilled out onto the Main Street and walked up and down. Two thick slices of steak and a bag of potatos were bought for supper and almost an hour was spent choosing books in the bookshop.