Today I started at The International Store to buy eight lamb chops, four long mild green chillies and a bag of peppercorns. Peppercorns are one of those things. As you get to the end of the packet you make a mental note to get some more but always forget and you then find yourself with no grinds left. I remembered this morning and there is enough in the cupboard for another month or so.

It was then up Oxton Road to the grocers were I bought more than I meant to. I got talking to to Kazim and he told me that he had been making quince jam flavoured with rose petals  brought back from Iran. He then recommended the broad beans and suggested they would be good raw just flavoured with some olive oil and lemon juice. He told me that he had a surfeit of mangos and I promised to look out a recipe for mango jam.

It was then on to Edge & Son for a large piece of rump steak for tonight. If it stays dry I might even do it in the barbecue. 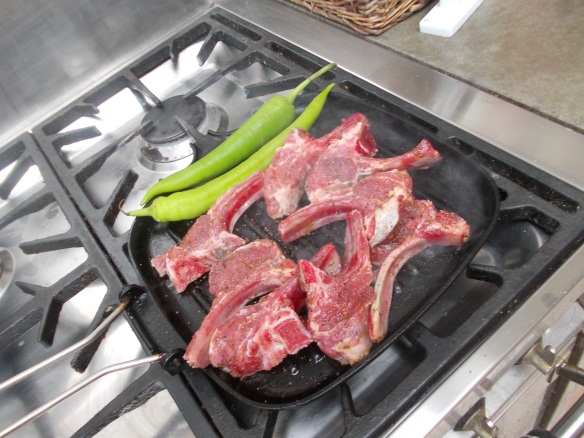 I had the lamb chops for lunch. I put a ridged grill pan on a full heat and allowed it to get very hot. Whilst that was heating I crushed a good pinch or two of cumin with just the one pinch of se salt. The lamb chops were then  put in a bowl for some olive oil and swirled round so they were greased up. About half of the cumin/salt mix was stirred in and they then had a good few grindings of black pepper.

By this time the grill pan was smoking so I threw the lamb chops on. They spat and billows of smoke swirled around the kitchen. As I turned the chops I put two of the green chillies onto the grill to heat through. 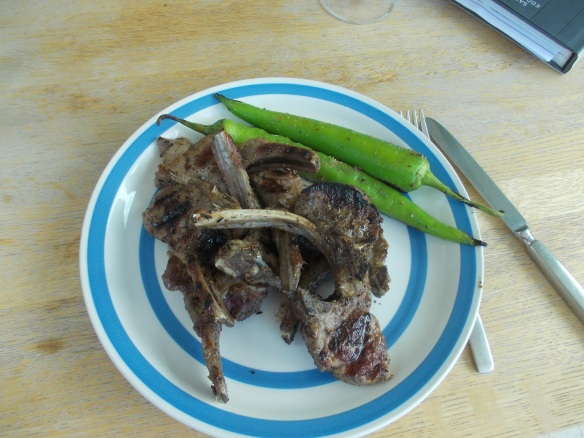 One of the best lunches I have had for a while.