It was early evening and starting to get dark outside. We were onto our eighth pint. The man and I had moved from the bar and were sat in the corner of the room on the right hand side as you walk into the pub. We had been joined by a blonde man whose surname when I caught it was Hegarty. There were empty glasses on the table in front of us.

The man and Hegarty were talking and they had slipped into their accents and apart from the odd word I couldn’t follow them although it was apparent they were talking about ‘some feckin’ idiot who lost his cow.’

My tongue felt thick at the back of my throat  If they’d asked me a question it felt too full for me to get out an answer and the walk up to the bar for another pint looked to be too far.

The man looked at me. Despite the drink his eyes were still blue and clear.

‘Don’t fall asleep now. There’s the rest of the evening to come and then you can walk back to your cottage for your bed. A day like this is not a great deal. Feck it might slow you down a bit but you can still walk.’

‘His father,’ he looked over at Hegarty. ‘His father would stop here a dozen times over the day before stopping for the night. His farm was up the hill there along the side of the stream and he’d a field back there beyond where you are on the left up from the sea. So if he was working he’d have to take his tractor from the farm down to the field and back again. His first pint would be set up as they opened the curtains in the morning and then as he drove past through the day he’d stop for another. Feck if he was working hard he could be past the place a dozen times before six in the evening and as he worked harder there were more times to stop.’

‘Once he was done for the evening then he’d climb back into his tractor to go home for something to eat. There were no lights on the feckin’ thing but he swore that he’d been doing it so long he could do it with his eyes closed and if he was here for a long night that’s how he was. If people worried he’d tap their head and swear to drive the thing slowly.’

‘But there was one year he missed the turn for the road up the hill and got onto the back road to Durrus. He had to walk home that night and he didn’t get there ’til past four in the morning all covered in black mud. It took them another three days to find the tractor. He’d got it stuck up the top of the hill down by one of the cuts where they used to cut peat. He had to drive his cows up there to help pull it out he got it stuck there so deep’

He turned his eyes back to Hegarty and I was lost from the words again as they went back to the ‘idiot cows lost on the hill.’ There was another full pint in front of us now and I took my pull at it and sat back on the bench my head against the thick hard blue wool of the man’s jumper.

I closed my eyes and thought of mackerel drinking pints and what they would taste like. 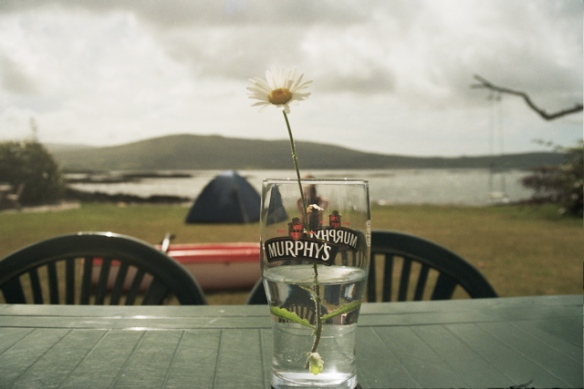