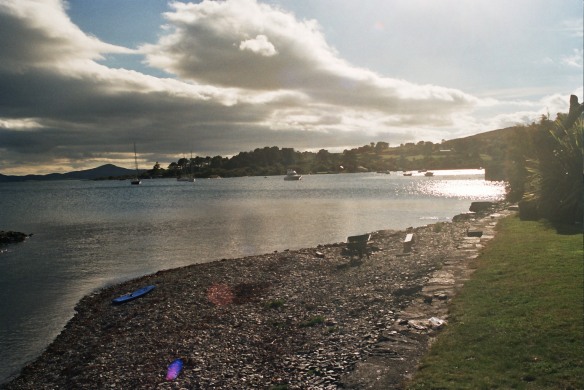 ‘Sometimes there will be a smart car that will pull in at the head of the pier and a man will get out and walk the length of it to see what is going on. He’ll be a tourist – a man from away from here – and there will be something knowing in the way that he walks. You can see it from here two hundred yards away. He’ll watch a boat coming in and it may be one or two of the lads and they will have been out for 40 minutes to the point off Own Island or maybe beyond there. There’ll will be times of day when the tide is such you need to go further out in the water to find the fish. But they are local lads and they’ll know what they’re doing and in that 40 minutes they’ll have caught a bucket or two of mackerel.’

‘The man from the car, he’ll be leaning over the railing there, and he’ll watch as they tie the boat up and the lads clamber over the other boats to get to the steps with their buckets of mackerel. The man will ask them some questions – How many fish did you get there? Where were you to catch them? – and he’ll look at the orange line and the feathers wrapped round the soft wood which they’ve left in the boat and as they talk he’ll be thinking “It’s only mackerel they’ve been catching. Where I come from we catch mackerel for bait. Mackerel are too easy. Where is the sport in catching them?” ‘

‘And the man will watch as the lads take their fish to the bottom of the slipway there and with a sharp knife they’ll split open their bellies and pull out their guts and take off their heads and the gulls call from the top of the lamp posts and the birds gather to pick at the scraps – fighting over them in the water. And the man will watch all this as the boys take up their fish and go home for their tea. And the man then will get back in his car and drive on his way thinking on the big fish he would have caught if he had that mackerel as bait.’

‘Feck a man like that is an idiot and a fool. He’s thinking he can take the fish for granted. He’ll have a big boat somewhere and a line and no doubt he’ll catch his mackerel for bait but he’s forgotten there’s nothing easy about catching mackerel and if you think that there is then you’ll go out there again and again and there’s feck all that you’ll catch.’

‘I can remember the first time I went out to catch mackerel by myself. I’d have been seven or thereabouts and I’d have already spent some years watching my brother and dad out on the boats and I’d have been out with them a few times pushed in the corner and told to keep out of the way. We lived in Kilcrohane in a house on the old burial path that leads down to the pier and we kept a few small boats there and one of those was a small wooden boat with two oars that was not too big for a boy to take out.’

‘It was a summer when for a week or two the sky would be nothing but blue and the sun beat down and even the soft peat in the top part of the hills was hard and started to crack and the grass and the heather was brittle to touch. We were at school but it was hardly there for the day there was too much time to be outside and one afternoon I had enough of it and I took myself down to the pier. The small boat was there pulled up on the stones but the tide was up high and it wasn’t too much effort to push it off its perch there and into the water. We spun round for a while but I found the oars and took myself out into the water and I was alone out there in the half circle of the bay beyond the pier.’

‘There was no thought of fishing but in the bottom of the boat there was an old line lying in the half inch of water. It wasn’t like the lines you have now all bright and orange and plastic. It was grey and thin with use and the hooks were red with rust and the six feathers were real feathers plucked from a chicken and looked fecked old and thin and there wasn’t enough there to catch anything’s eye.’

‘But I was out on the water and the sun was up and it seemed to take the lid off the surface, and for a while it opened another world for me and as I pulled out and watched the pier and the shore move away I forgot about school and the voice of the teacher and I was alone there with the sun and the sea. I got tired after a while. Feck I was probably only a hundred yards out but I had to stop and as we sat still in the water I reached down and took out the line.’

‘The hooks were caught up and tangled and as I tried to unpick them my mind forgot about the sea and the wind that was taking me out until the line with the hooks was laid out straight on the bottom of the boat. Having done that there was nothing else to do but to throw the lead weight over the side  and unravel the line. I wrapped the line around the bottom of my foot and took the oars again to pull myself along the water watching the line stretch out back from the boat and then as I stopped the weight would pull the line back straight under the boat.’

‘I thought as I threw it in I’d feel a pull straight away like I’d seen with my brother but all I could feel was the weight of the lead swinging slowly under the boat. It caught once on some weed and that snag had me pulling it up quick through my hands the line spinning water through the air but then I saw the bare hooks break the surface and I let it down again.’

‘I lost time that afternoon until I looked up and I saw the distance I had drifted from the shore. The pier looked a distance away and all I could see were the people like matchsticks and I thought they were shouting for me and I knew it was time to turn round so I started to pull in at the line and as I wound it back round its wooden frame I felt it shudder in the water and I thought it had snagged on some more weed and then caught on a rock and as I pulled on more I felt for the first time the weight of six mackerel on a line. In my hurry now I pulled the line straight out of the water and into the bottom of the boat. I had to be careful to keep one hand on it otherwise they would have had had the whole lot in the water. In a minute I had the hooks just up under the surface and I could see the six fish all silver and fighting against each other to get away.’

‘I didn’t know what to do with them then. There was no net or helping hand so I hauled them into the boat. Even now six mackerel in the bottom the boat are like cats trying to fight their way out of a bag, There’s no feckin’ tellin where you start. Back then I sat there on my wooden seat and I watched those fish twist and turn and thump against the boat. I’d seen my brother take up a stick and hold a fish tight in his hand and tap it hard on the head. That didn’t quite stop its movement but it was enough. There was no stick in the boat and my hands didn’t seem big enough to grab a hold of their thick waists so I took off one my shoes and I got on my knees amongst the line and the hooks and I grabbed at the fish with my left hand and as I was able to keep one still for a second I took a hit at it with the shoe in my right hand.’

‘The mackerel were still after a while although they would still thump at the bottom of the boat. There was blood in the water and all over my trousers but as I sat there in the sun I saw that one of the hooks was caught in my finger and most of the blood was mine. There was their pink shit too which was smeared on my arms and shirt and one of the oars from the boat had slipped in the water in the rush to be at the fish.’

‘I sat back again and looked at the pier and it seemed so far away now there no going back but as I looked again there was a bigger boat with two men in it pulling out towards me to take me back.’

He had finished talking now and he drank at his pint and finished it and put the glass back down on the bar letting the traces of white fall back down to the bottom.

‘So don’t let any feckin’ idiot say that fishing for mackerel is easy. I was there for an hour and there was feck all of the bastards I caught and I don’t know what I did to catch the six that I did and there is feck all that is easy with that. Now do you want me to get you another pint before the afternoon is out?’