It was 1.00 in the early afternoon and I was sat on the wall on the other side of the road from Arundel’s Pub looking out over the bay. The sun was high up in a clear blue sky but there was a slight breeze to take some of the fierceness out of the heat. I had come up for a pint before cooking lunch. We had been out catching mackerel and there were twelve of them in the fridge, filleted and ready to go. I could see the smoke from a fire on the beach that had been lit in readiness for the fish. It would need another fifteen minutes or so for the flames to die before the fish needed to go on the black grill.

The pub had been empty when I went in get my pint. It had been poured slowly and surely and I went outside to take in the quiet in the sun before going back to the bustle of lunch. For those couple of hours all was still. Even the tractors had stopped barreling past in a rattle of chains and metal.

A few feet to my right a man was asleep back down on the wall, his knees pulled up and a hat pulled over his head. The only immediate sound was his wet breathing and the sound of the breeze and then a car pulling in on the gravel outside the pub.

I looked behind me. It was a battered red car held together with rust and pieces of wire. The engined coughed off and the man with the black beard clambered out. He was big against the size of the car. He didn’t look at me but went straight into the pub. Despite the heat he wearing heavy blue jeans and a blue woollen jumper.

I turned back to drink at my pint and continue looking out over the bay. The breeze was moving in patterns across the water and as it shifted and turned it shimmered a silver light that danced in the air.

After five minutes the man came out of the pub and walked over to me. He was carrying a tray with three pint glasses in it. Two of them were dark and black and the third was yellow. He put the tray  on the wall and took the pint of cider and put it down on the ground next to the man asleep on the wall.

‘He’ll be thirsty when he wakes up,’ he said. Then looking at my empty glass he handed me one of the other pints, ‘And you will be thirsty sat here doing feck all in the sun.’

I stood up next to him and we both drank at our pints.

The man to our right grumbled in his sleep and I thought he was going to fall off the wall but he steadied himself his hat not moving from its place over his face.

‘He’s there dreaming of mackerel,’ the man said. ‘Do you know Patrick Cutter. That is him asleep. Well you’ll meet him okay if he wakes up there and falls off the wall. He forgot how to swim once when he fell in off his boat out there when he was fishing.’ 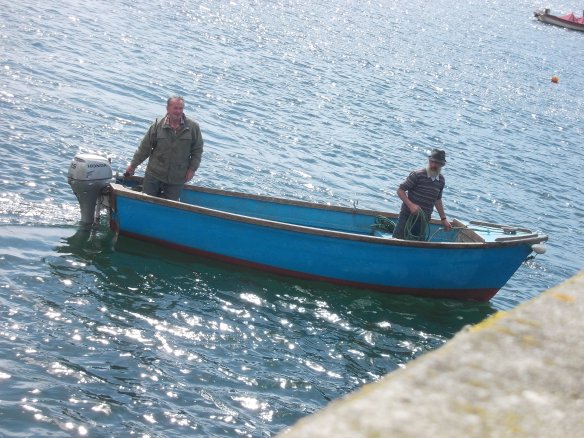 ‘The feckin’ fool was out by himself and he’d gone out on a day like this to catch fish in the afternoon. His boat was one of those long ones you can see there tied up on the pier and he’d not taken it out far when he stopped the engine and threw over the line. He caught plenty of fish quickly and took out their guts and cut off their heads out there in the water and there was a crowd of birds around his boat picking at what he threw at them and fighting over the pieces.’

‘Well after a while he finished his business out there and so he put his knife away and turned to pull at the rope to start his engine. Now an engine can start a hundred times, first time with no feckin’ problem but every so often it will choose to require a bit more attention. This was one of those times and he found that he was having to pull at it a few times to get it to catch. Well it still didn’t catch so he swore at the feckin’ thing and pulled again and he pulled at it hard so he lost his balance he fell over the side of his boat.’

‘Well there were man standing up here as well that day and they could see what he was up to and one or two of them would have been slowly licking a lip at the thought of the drink at the funereal. But they said nothing and they watched to see what he would do.’

‘Now the birds aren’t afraid of a man in the water and where he fell was where he had been throwing the pieces of fish and they continued to pick at the fish and they started to pick at his hair and his hands as he splashed to try and find where he was. The strength of the birds beaks drove him quicker under the water, feck he was going under anyway with the weight of his clothes but those beaks are sharp and they tore at his hands and his blood started to flow in the water.’

‘As he said it later, as he went down deeper under the surface he remembered how quickly he had caught the mackerel and his mind filled with how thick they must have been in the water and as he started to float down with the weight of his boots he said it was if he was caught in a wind of silver light as the fish were around him and he could feel them crowd upon him and as he closed his eyes and let himself go. And there was nothing so soft then he would feel again as the press of those fish as they swam over and around him and his bare face and his hands were filled the passing of those mackerel.’

‘Well he was a feckin’ fool for those fish and then he kicked off his boots and was able to grab at the side of his boat. And the men up here they watched as he hung on for a time and then pulled himself in. He sat still in the boat for a while and then he rowed it back in to the pier. He took himself home after that and it was only later, ardent in drink, that he spoke of the mackerel and how the mass of them had carried him back up to the boat.’

‘He could swim alright then but after he fell in he said that somehow he had forgotten and he would not take himself off alone in a boat again.’

‘So if you see him like that asleep in the sun he’ll be dreaming of mackerel and their feel as they swim past his face there in the water.’

We were quiet then for a while and drank at our pints and the man lying there grumbled again in his sleep.

1 thought on “Dreaming of mackerel”