Sunday afternoon and we were two days into the festival with the Jack Tobin Cup and the mackerel fishing competition to go on Monday. Saturday night had ended with two of us propping up the bar in Arundel’s the place so full we couldn’t get out even though there was no money left for another pint.

The weekend was starting to take on the feel of a long drawn out wedding party. Barely familiar faces on Friday night were now being greeted like old friends and there was goodwill in the air buoyed on by Graham Norton’s performance on the Friday night and the worst of any rain holding off.

Around 11.00 Sunday morning the roads were cut off and we were stuck in the Cottage bang next to the pier where all the activity for the day was to take place.

The activity started with coastal gig racing. The road and pier was clogged with rowers and their families and the trailers carrying carrying the heavy sea going rigs. They raced from the point off Owen island back to the pier and continuous stream of commentary coming from the four large speakers strung up along the pier.

Then there was regatta spread out over the afternoon with swimming races and the greasy pole, car bashing, a water slide and a bucking rodeo horse.

The afternoon concluded with the duck chase. Twenty or so boys stood on the pontoon ready to jump in to give chase as soon as the duck was let loose in the water from the boat a few yards off. Galen was amongst the boys.

‘Boys the duck is winning this chase. Can none of you swim any harder? The duck will get away. Tadgh won’t be pleased if none of you catch it and he loses his duck. Boys you have to swim harded!’

‘And there is a lad there who had it but he let it get away. I tell you that duck has a smart pair of legs and its pulling away again. Are there no men in the water amongst you boys able to get a hand on this duck?’

‘Now that lad had a hand to it. So how did he get away. Boys the duck is heading for land. Boys can you hear me its heading for thje pub garden. The duck wants a pint. Boys there are dogs in the garden and I don’t want the cup to go to a dog.’

‘There don’t kill him now. Put him up in the air now! But not by the neck!’

Galen was out of the water in his blue trunks standing amongst the tables and drinkers in Arundel’s garden holding duck aloft by its neck.

‘We have the winner. We have the winner! Now the duck likes to roam a bit and he’s yours for the year. He likes to be fed now three four times a day. The eggs you can sell on if you want. So give him a big round of applause now ladies and gentlemen.’

Galen walked the duck back to the pier. He was holding it properly now and it appeared to have survived being grabbed round the scruff of its neck. It was shovelled back into its box and Galen was given one of its fresh eggs as a prize. He was then called up to the pub to be given a plaque.

Later we ate smoked mackerel kedgeree. The mackerel caught that afternoon off a kayak from the point near Owen Island.

After that the kids pressed for another trip to the pub. We walked up to Arundel’s and there was a band playing in the marquee round the back. We went in and found some seats. Pints were drunk. The band played Satisfaction. There was Dad dancing involved and all kids were embarrassed. 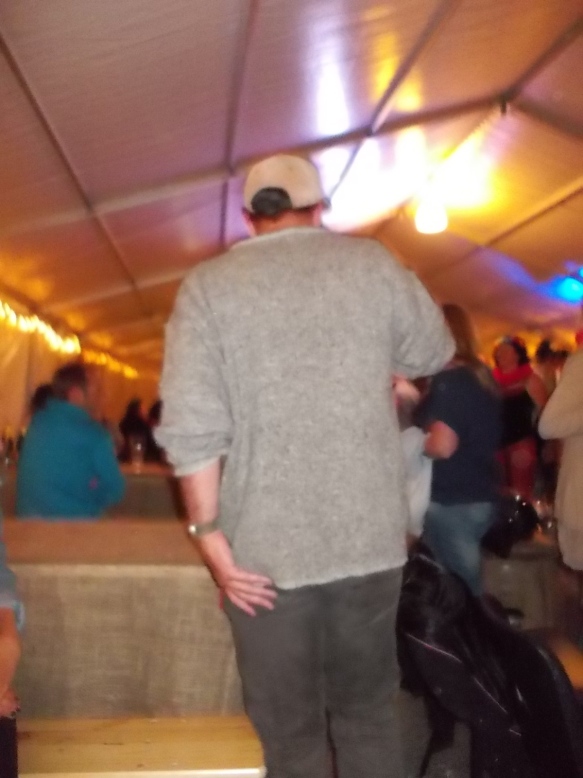