Well that was a bit of a thrill. Walking into the kitchen and there is a smell of bacon. Smell of bacon I have made. It has been in the fridge downstairs for the last five days and now it looks like bacon, smells like bacon and even tastes like it. If there is going to be a criticism then it maybe a bit salty. I will give it try with the bacon eating kids over the weekend and see what they think.

In the meantime it is Friday evening and I felt like a one pot meal. There was a free range chicken going cheap in the supermarket so I picked that up with the intention of doing something vaguely Spanish with it after the excellent meal we had at Lunya last night.

I took a couple of lardons from the newly made bacon and started to heat them oil. As they sizzled I chopped up the chicken and threw that in. Chopped onions, garlic and three whole green chillies were thrown in and stirred about with a good spoonful of paprika. I then peeled a couple of potatoes, quartered them and pushed them down amongst the chicken. It was then a question of adding some wine, a tin of tomatoes and letting it cook for an hour. 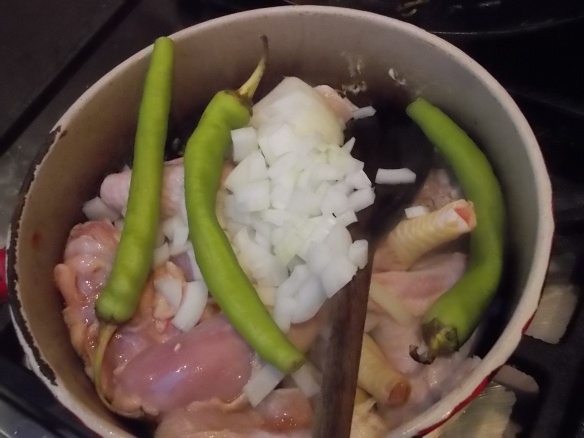 It is all about done and I am going to eat it now.

Thank you Peter for the Cava.

Listening now to David Byrne & St Vincent. A good birthday treat for myself.