So late this afternoon I was sat in one of my favourite tapas bars in London. Work for the day was done and there was a small glass of beer in front of me and three pale blue speckled quail’s eggs nestled next to small mounds of sea salt and just crushed roasted cumin seeds.

It had taken me about 45 minutes to walk there with two heavy bags on my back. The taxi taking me to my afternoon meeting had gone through Clerkenwell so rather naively I had thought it would not take me too long to walk back. I didn’t have the address of where I was going just a vague idea of direction and the hope that I would recognise it when I got there. It took longer anticipated and there were lots of stops to look at maps to try and get a sense of where I was and where I was going. Eventually I came across a map where I found a street called Exmouth Market and I knew that I was near.

When I got to Morito there was noone there. But the lights were on and there was a waitress out the back. The door was open and she told me they were not quite open but I could go in have a seat and they would be able to give me something to eat in five or so minutes.

I took my seat and someone brought me a small glass of water. Although the kitchen was not yet open they could give me something to nibble on. So I asked for a beer and the quail’s eggs and some bread to chew on.

Then the man behind the bar pressed forward and Big Star was swiped off and the music was David Bowie and Ashes to Ashes. An okay Bowie song but not Big Star.

The man walked past me and asked if I wanted another beer. I nodded yes and asked him ‘What was wrong with Big Star?’

He looked slightly taken aback. I was wearing my suit with a case by my feet.

‘Oh shit. I thought that’ he said. ‘It was Ballad of El Goodo and it goes a bit loud and you were the only one in here and I thought as I pressed the button he can’t  be a fan.’

‘No worries. I’ll put it on again. It’s only a shame that September Gurls isn’t on the playlist.’

So he put it on again. And then he put on some Neil Young. I ate a small plate beetroot with creamy cheese and walnuts and another small plate of spiced lamb with aubergine and yogurt.

Then to finish I had a plate a baby squid with sumac. As I ordered I passed him my iPod scrolled down to September Gurls. He didn’t say anything but took it from me and plugged it in.

I had a glass of manzinilla with the squid. They were very small. Less than an inch long. Crispy and tart with the sumac. My iPod stayed plugged in and as a few mnore customers came in they got to listen to Big Star as well. 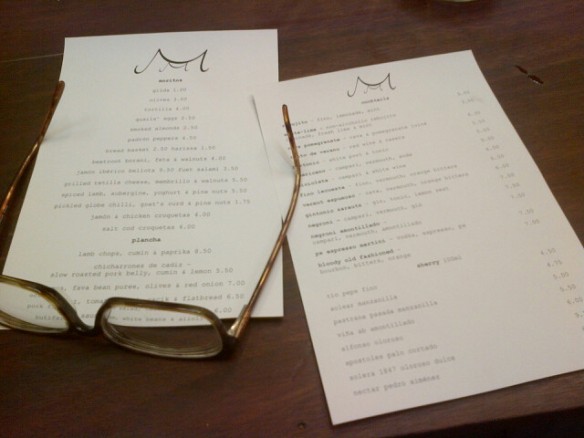