Mary put the pint down on a mat next to the small pile of money on the bar behind where the man was sitting. She took a note and rang it through the till and put the change back on the bar. The man turned round to pick up the pint nodding a thank you as he did so

He put the pint on the table in front of him and sat up straight in his chair.

‘Feck Tom you listen now. How many years have you and me been out there catching mackerel. Feckin’ hell we took a boat out there back when we were wearing shorts and should have been in school and we rowed it out and we caught forty of the bastards three lines over the side, you, me and your brother. And now you sit there all tight and quiet because you were out there for a day yesterday and did not catch a thing. You can remember now two days after we caught the forty we took a morning out to catch some more and we came back with nothing. We spent four hours out there that second day and it was more than school we missed and none of us, not you, me or your brother would come back ’til we had one.’

‘Tom. You know as I do that there is no art and there is nothing pretty about catching mackerel. All we are doing is sat out in a boat in the bay there hoping that we drift so the hooks that are in the water will come amongst them down there and we can be pulling them in. And the hooks may be there one day and you can pull twenty of them out of the water and you can be there where you think is the same place is at the same cut of the tide and the bastards will do nothing at all.’

‘And then you can be out there with nothing else to do and you are in the middle of the bay where the water goes down so deep there is feck all at the bottom and because you are bored you throw a line over the side and there is one of the feckers there and you pull into your boat a fish that is big enough to feed two for the night and its colours are so bright and fresh in the light.’

He paused for a moment and took a drink at his glass.

‘There’s pollack. But they are no fish for catching. Feck they’ll be heavy and on the line you think you have caught on some weed or a stone but as you pull them in there is nothing there and out of the water it may take the trouble to wave its tail in the air but there’s no fight there.’

‘You might tell me there is some talk to be had at which is the more stupid fish. The mackerel that continues to thud its tail against the wood when it is dead and there is nothing else to fight against or the pollack that is half dead even as it tries to catch itself on your hook.’

‘So Tom will you tell me? Are you bored of catching mackerel now?’

The man picked up his pint and he finished off and as he did so he half caught at the question in his mind and he worried about the fish. 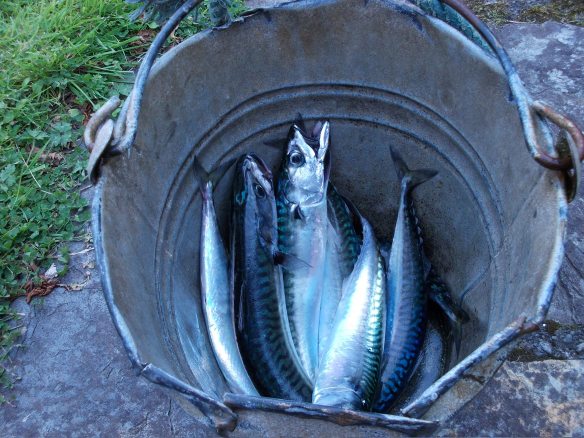