She walked to the end of the pier. It was shorter then. A snub of concrete that ran across down round the back of the Cottage and came to an abrupt end out in Kitchen Cove. There was no slipway down to the water and a boat would only be comfortable up against it at high tide.

The sun had gone down now and she watched the two boats that had come in. They were up against their moorings, engines turned off, the thud of them had stopped and the bay was quiet apart from the bad tempered call of gulls. Although the sun was down there was still a murky light but there was now a chill through the air. Through the gloom she could see the activity of the men on the boats and the movement of their bright yellow waterproof coats. Their voices carried across the water along with the sound of their movement around the boats – the pots being repositioned, the dead fish guts being swept up from the wooden decks, boxes and buckets.

When the men were done they climbed over the side of the boats and into the small wooden dinghies that were tied up to the moorings. The ropes were let go and now she could hear the sound of the oars in the water and the wood against the green metal rowlocks.

She waited for them still. As they got closer to the end of the pier she called out across the water ‘Do you have anything Brendan?”

Brendan O’Mahoney was at the oars on one of the boats. He stopped rowing and turned over his shoulder to call back to her ‘I have a few of them here Miriam. Are you wanting one for tonight?’

The two dinghies pulled up and were tied against the pier away from the weather. Brendan climbed the metal ladder onto the pier carrying an iron bucket.

Miriam walked over and looked in the bucket. All she could see was a dirty piece of brown clothe. Brendan picked that away and in the bottom lay two black lobsters curled up tight against each other. As the clothe was pulled away they started to snap their tails the sound of them hitting against the metal of the bucket. 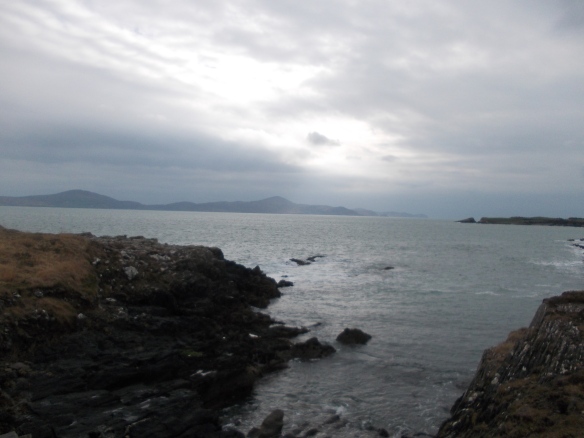