Now that is an altogether different question. Killing a mackerel is straightforward enough. You just need a hard thin stick and to give it a sharp knock at the back of the head and you are done. Cooking them is a whole different science that you need to break down.

The important thing is to do it quickly. You will have killed the fish as it came out of the water and then pulled out its guts an hour or so later when back on land and down by the rocks. They will start to turn against you as soon as they are out in the air and so you need to cooking them as soon as you can once you are done cleaning them and in the meantime keep them out of the sun. If you have had a good day then you may be too flush with the success of it all and the time spent celebrating the catch with a beer means that the catch is forgotten for a while and allowed to harden and dry.

There are, I think, three choices from which a decision can be made. Having cleaned the fish you can fillet them and the fillets can then be put in a hot pan with some butter and oil and cooked for a minute or two until the skin starts to loosen and the flesh be pulled gently apart with fork.

Otherwise you need to cook them whole and in one pice. You can have a debate with yourself as to whether you keep the head on or take it off. I think they are better with the head kept on. There are those who are squeamish and think the head puts them off particularly with the white dead eye looking back at them. But if you are going to be squeamish then you are not doing a proper job with the eating of them and you may as well start on eating something else less likely to offend.

So keep the head on and you can then either roast them in a hot oven or you can cook them over an open flame – be it a fire on the beach or a better controlled barbeque. 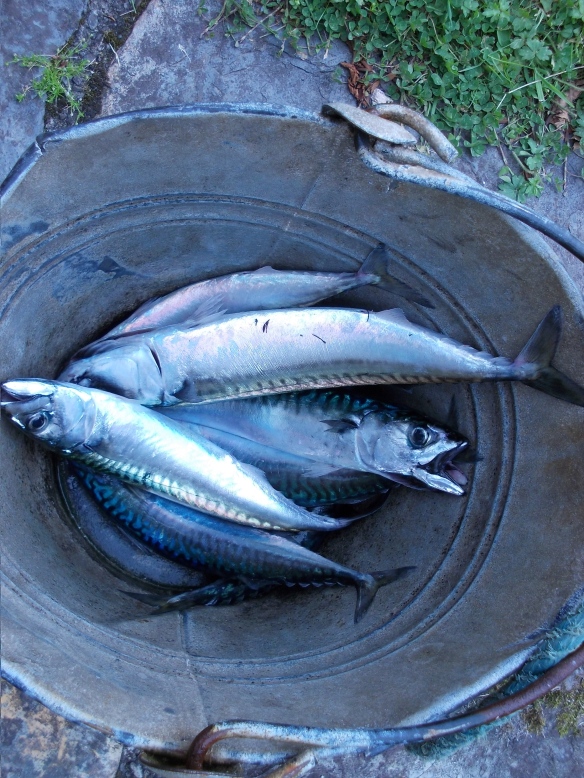 1 thought on “How to cook a mackerel”