That first evening in Prague we are in a restaurant 10 minutes walk away through some dark back streets – Budvarska. Leafing through the menu I started to come to terms with the extent to which the eating of meat would come to dominate our eating time over the course of the next few hours. The only concession to the vegetarian amongst us was a dish of deep fried cheese with tartare sauce. There were a couple of fish dishes (but we were a long way from the sea) and otherwise it was all variations of pork, beef or duck with various combinations of white or red sauerkraut and dumplings. All was well with my world and I started with a plate of Old Prague Ham and butter followed by half a buckling with red and white sauerkraut and dumplings washed down with a few pints of very good beer.

We went to bed early with the intention of getting up early to walk the city. I slept peacefully.

In the event out anticipated leaving early was disrupted by the early return of the smiling man with a moustache. He arrived whilst we were still in pyjamas with a mate intent on fixing the boiler. The apartment was so small that we were stuck there in our pyjamas for the forty-five minutes or so they spent banging at the reluctant boiler with hammers and various other noisy implements. They left with more smiles and ‘Good-bye Mister’ and reassurances that all was working.

The apartment was situated in the north of the city a 30 minute walk up to the back of the castle. We set off avoiding avoiding trams and segways bumping into a couple of lost Italians. The streets were quiet at the start but as the buildings got older and the streets more cobbled  you could feel the slow gathering pace of tourists until we turned a corner and they seemed to be everywhere holding up their phones and ipads to take pictures.

On the segways the closer we got to the castle the more of them there were. They travelled in groups. A cheerful Czech leader heading up charges who followed behind in various degrees of nervousness. At the back there were always a couple muttering under their breathe ‘I look a twat I look a twat.’ Another unsuccessful element of the weekend was my failure to crash into one of them.

Having walked through the crowds in the castle and admired the Sturbucks with the best view out of all other Starbucks we came down the hill into the city proper. We carried on walking admiring some vaguely homoerotic statues until we found another bar for lunch. In between It was opposite a grand looking cafe were we had thought about going but it had white table-clothes and we weren’t sure if that was for us. In the event we did the table-clothes in the evening.

The bar for lunch was more wood and waiters anxious to refill my glass of beer. They appeared as if by magic to ask if I wanted another just as I was slurping up the last sip. The sort of behaviour can enamour one to a city.

There was more meat to be had on the menu along with a section headed ‘Meals to Accompany Beer’!!

Some of the dishes on the meat menu are worth repeating:-

– succulent rabbit in garlic and shallot sauce with home made spatzle

There was enough variety to justify a visit each day of the week. I had the rabbit and it went down very well with dark beer they kept serving me.

After lunch we watched a family boating on the river. 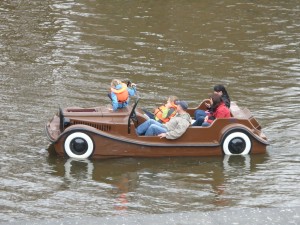