It had been warm all day and over lunch the sun had come out over the cottage and we ate outside – although all-around there were clouds – we seemed exempt.

Late in the afternoon moving towards evening – around 7 o’clock – a pale low cloud came over but when you looked up over it there was still a hint of blue sky. There were boats fishing for mackerel off Owen Island on the incoming tide and a shallow golden mist had fallen over the Mizen. Having fallen it seemed to rise again. It was gold as the sun caught it adding other colours and depth so that behind Carberry Island it became impossible to tell what was cloud and what was the faint glimmer of the Mizen head. After a few minutes it cleared so that the Mizen and its mountains rose above the line of mist floating over the water inbetween. I could see them standing in the boats as they came in and that suggested activity in turn suggested that in the twenty or so minutes whilst the light and cloud had played over the bay mackerel had been caught. 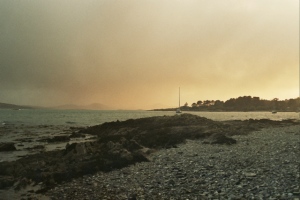