There is no great secret to the identity of our famous neighbour.

Lunchtime today there was a need for fresh air and so I took myself for a walk into Liverpool City Centre which with the wind blowing in off the Mersey can pass for fresh air on a good day. Walking past a bookshop I saw a copy of Graham Norton’s new autobiography and remembered that last week he had been on The One Show with a brief clip of Arundel’s Pub. I thought I would go in and have a flick through to see if he gave it a mention.

There was more than a mention. A whole chapter was given over to Ireland. Loitering  by the shelves in W.H. Smith there wasn’t enough time to read the whole chapter but I was able to give it a skim. There was pride at having a walk named after himself in Bandon and then a lead up on how he came to end up buying a house in Ahakista.

It transpires that he had ambitions on a white washed hidden away small cottage from where there would be a smell of freshly baked bread a grilled mackerel. It sounds as if he may have had his eyes on the Cottage!

There was then mention of the dilapidated state of the house when he bought it and I thought back guiltily to the summer ten years ago when we squeezed past the broken down gate and into the garden and some of us poked their heads through the missing windows to look on the rooms that were thick with damp and the the weather. Before he bought it there were a few years when it looked as if the house would crumble back into the hills and the sea.

There was a picture of a pineapple stuffed with a plastic cup and extruding straws and a low by blow description of last year’s pub quiz.

Before I put the book on the shelf my skimming eye was caught by a comment on not being any happier than arriving and driving down the short drive to the house.

I get that feeling still pulling up in the car on apron of concrete at the top end of the pier having done the drive up from Durrus and seen the wide expanse of Dunmannus Bay and the water clear and flat in the sun.

Should have asked him to the party! Next time perhaps. 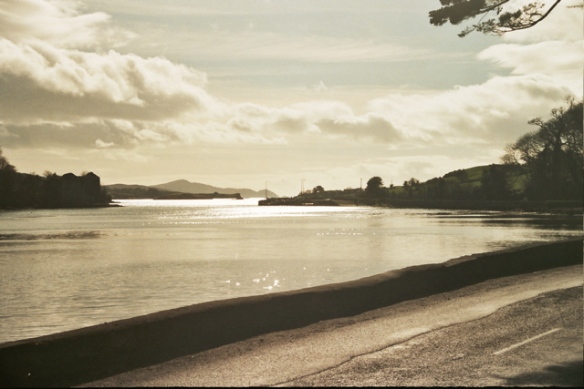