We ate pumpernickel last night and one or two questions were asked as to the meaning of the word.

So when in doubt turn to Wikipedia!

The philologist Johann Christoph Adelung states that the word has an origin in the Germanic vernacular where pumpern was a New High German synonym for being flatulent, and Nickel was a form of the name Nicholas, commonly associated with a goblin or devil (e.g. “Old Nick”, a familiar name for Satan), or more generally for a malevolent spirit or demon. Hence, pumpernickel is described as the “devil’s fart”, a definition accepted by the Stopes International Language Database, the publisher Random House, and by some English language dictionaries, including the Merriam-Webster Dictionary. The American Heritage Dictionary adds “so named from being hard to digest”. A variant of this explanation is also given by the German etymological dictionary “Kluge” that says the word pumpernickel is older than its usage for the particular type of bread, and may have been used as a mocking name for a person of unrefined manners (“farting nick”) first. The change of meaning may have been caused by its use as a mocking expression for the (in the eyes of outsiders) unrefined rye bread produced by the Westphalian population.

The OED does not commit to any particular etymology for the word. It suggests it may mean a lout or booby, but also says “origin uncertain”. The OED currently states the first use in English was in 1756.

A false folk etymology involves Napoleon, who, while invading Germany, asked for bread and was served dark Westphalian rye bread. According to the folktale, Napoleon declared that this was not suitable bread for himself, the emperor, but was bread (pain) for Nickel (or Nicole), his horse: “C’est du pain pour Nickel/Nicole!” In a variation of the same basic story, Napoleon declared that the bread was no good for him, but was only good (bon) for his horse: “C’est bon pour Nickel!” The name “Nickel” is not confirmed for any of Napoleon’s many horses, still, given the number of horses used, this remains a possibility. This folk etymology grew from a “witty interpretation”, proposed by seventeenth-century satirist  Johann Balthasar Schupp, that the bread was only good for “Nicol”, a nickname for a weak or puny horse. It is not clear why anyone imagines that the Germans would name a much loved local speciality after an insult in a language they did not understand. 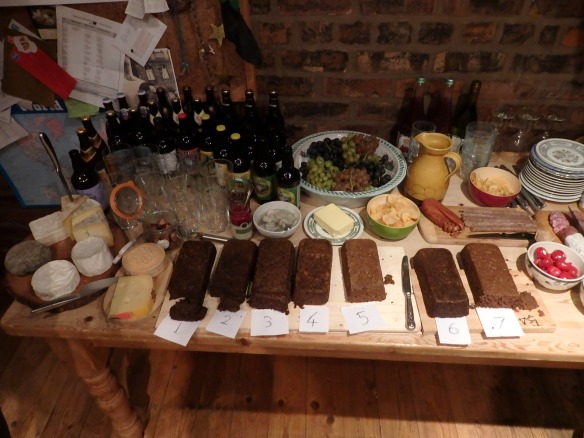 Is there a word to describe a gathering of pumpernickels? Would trump cover it?

Anyway they were mighty fine. As was the beer, cheese and sausage.