The pork chops looked so good in the Farmer’s Market I came home with four of them.

Back at home they seemed like a good excuse to get out a book on Belgium cooking that had come my way via an Oxfam bookshop  a year or so ago.

At home the chops looked bigger than they appeared on the butcher’s slab so in the event we only had three of them.

They were salted and peppered and then doused in flour before being fried in butter in oil until a good brown. The chops were taken out of the pan for a while and sliced onions stirred in. They cooked until golden.

It is always important to have your onions golden.

Once they were the chops were laid on top together with some good beer and allowed to cook.

We had them with chips. 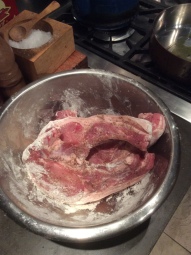 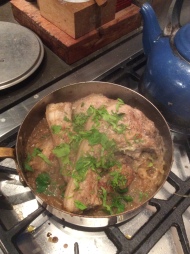