Early Saturday morning and I was down The Farmer’s Market in New Ferry. The grocer had some fat parsnips and they looked too good to resist for a quick Saturday lunch.  A soup would also provide a good opportunity to try out the hand blender I had been given for Christmas.

Back home a chunk of butter was melted in a big steel pan. As it melted two  onions were chopped. They were given time to sizzle and soften in the hot butter. As they did so I cut up the parsnips into more or less equal sized chunks before adding them to the butter and onions.

I left them heat through for five minutes or so. I didn’t want them to burn but I did want them take on some caramelisation. Once they had done so I stirred in a good teaspoon of fiery curry powder and some plain flour and plenty of salt and pepper.

Once it had all cooked for another couple of minutes I tipped in a litre and a half of water. It came to a simmer and I left it until the parsnips were soft and giving.

We then introduced the blender. Within seconds there was a good spattering of soup over walls, toaster, radio and jumper.

Once we got the blender under control the soup was very good. We ate it with bread, listening to Boz Scaggs. There was a lonely tall Christmas tree in the garden. 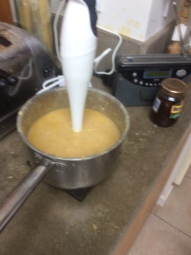 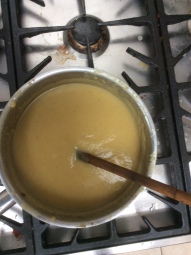