It is quince season again and there was a tray of them in the greengrocers yesterday.

I bought three with the intention of using them in a stew of some sort.

Back at home I went through the books to see if I could find some inspiration.

All of them required lamb and onion to be cooked in oil, then seasoned (this evening – cinnamon, saffron and turmeric), covered in water and cooked slowly for an hour or so.

In the meantime quince, peeled, cored and quartered, was fried in butter until it took on some colour. It was then added to the lamb for the final half hour.

We ate it with rice.

It was good food to be had with the darkening late afternoon after I had reconstructed a pond and done my bit for global warming with a fire of dried leaves. 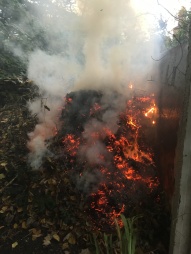 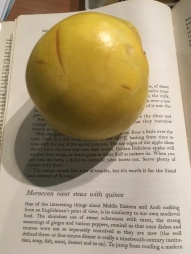