I went to a minor English public school and hated it.

In some ways it might not have been as bad at the prep school I went to. There I was dropped off every Monday morning from the age of about ten and stood in tears through that mornings assembly dreaming of running away but with nowhere to go to. But at least there I had a nickname. Even the teachers called me “Chops” and I was free to play through with myself the adventures that might take me away from the place.

Once I was at the public school I lost my familiar nickname and there was more cruelty in the names that followed and for my first few years there I just went by the name of “******”.

One of the few good things I had with me when I arrived was a grey tape machine. It was built like a small shoebox with a speaker at the top, a slot for the tape to go in and five chunky keys to press to make it play, record, pause, rewind and forward play. I think the only tape I had was the first Beatles compilation.

There were still some vestiges of fagging when I started at the school and one of the jobs that we had to do was take it in turns to get up early one morning in the week to clean out the dirty dishes that had been left in the sink by the sixth formers in their common room. This was a blue basement room that had to be closed a couple of years after I started at the school when it transpired the ceiling was made up of abestos board. The filthy sink was in the far left corner and was always left filled with dishes caked with food and cold water but the walls down there were covered with posters.

This was 1977 and the posters would have represented tastes in music that were about to be swept away by punk. But those posters spoke to me of a musical world that was almost totally unknown to me and it seemed as if only I could unlock the sound of that music all would be okay.

Up to then my musical lanscape had been limited to the soundtracks of Hair and Jesus Christ Superstar and an unlikly friendship with someone called Justin Clayton who went onto play guitar with Julien Lennon (who come to think of it had also been at the same prep school – albeit briefly) and who had a copy of Black Sabbath’s Technical Ecstasy.

The posters were suggestive of whole new world of grown up sound that was out there; Pink Floyd,  Jethro Tull , Genisis.

I was lucky in that the wave of new music sweeping all that aside caught me before I got too heavily pulled in.

Despite that early exposure I never quite got the majority of those 70’s bands although Pink Floyd had me badly for a few years and somewhere in the back of my mind I more or less know off by heart the whole of The Wall.

But then other more rigorous music was starting to come though and I was occaisionally able to pick up an early copy of Smash Hits. Ian Drury’s opening words to Plaistow Patricia were whispered under our breathe and Blondie’s Heart of Glass was one of the first singles I bought along with a poster of an impossible Debbie Harry and somewhere long the way I was introduced to late night radio and John Peel.

Strangely although punk had been raging over the previous few years we somehow came to the filth and the fury six months too late and second hand. But we could hear it raging in the distance and we hung on to its coattails.

I had a friend Ivan Tennant who came from near Liverpool and was almost a scouser. He had got hold of the first album by Orchestral Manouvres in the Dark and we sat up one night listening to it over and over staring at the blank black sleeve. Then someone had a copy of Unkonwn Pleasures and we sat listening to that and the boy who had bought it wanted to know what I thought of it and all I could think to say through its clatter of rhythm and guitar that it was the sort of music that would inspire other music.

I was reminded of all this when picking up on an article written by Bill Drummond that someone put up on Facebook in which he set out some of his memories of the Liverpool scene from the late 1970’s and early 80’s and the part that Pete Burns had played in it all.

My friend Ivan Tennant skirted around some of that and he had brought back from Probe Records to put on the wall of our sixth form common room a vast yellow poster of Pete Burns’ first bad Nightmares on Wax. Talk at school took tales of Probe Records and the bands that played at Erics and we listened to Echo and the Bunnymen., Wah! Heat and The Teardop Explodes and as we did so we started to listen to the bands that they listened to.

All the while we lay in our beds after 10.00pm earpieces stuck in our ears taking in the music that John Peel played. I can still hear him setting up a track from the Doc at the Radar Station, the latest album from Captain Beefheart, before cluttering into Totally Wired by The Fall.

In the article Bill Drummond talked about a family tree of Liverpool Bands put together by Pete Frame. I had the same family tree stuck to my bedroom wall at home. Last night I was able to find it neatly tucked up inside the inner sleeve of a compilation album of those same Liverpool bands called To the Shores of Lake Placid. 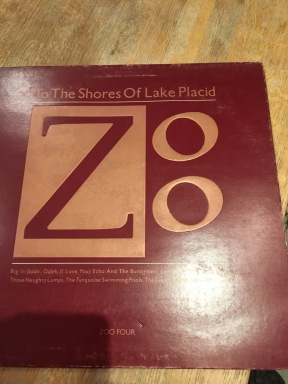 Still the boy at that public school looking at the posters on the wall and wanting to listen to the music.

2 thoughts on “To the shores of Lake Placid”