Go fishing for mackerel too near the rocks off Owen Island then if the hooks on your line don’t get caught and lost in the seaweed it is not unusual to come up with a pollock.

They are generally a disappointing fish. When they are first on the line they feel heavy and briefly there might be an expectation of the fight that comes with half a dozen mackerel on the line all pulling in their own direction to get away. But a pollock will just hang there a dead weight to be pulled in.

Just the one mackerel will continue to thump its tail hard against the wooden bottom of the boat even after it has taken a tap at the back of its head as if it could wish itself back in the water by keeping on with that one grip on life. The pollock will just lie there grimly satisfied with the further disappointment that will come when we try to eat it.

Although the ones we pick off from near Owen Island have some size on them they are small compared to the fish we sometimes see coming in from the deeper parts of the Bay. The have a sludge brown colour about them with a flash of gold over the belly.

Whatever their size they have not been good to eat. They normally give a good couple of fillets but there has always been something watery about them and over the last few years whatever ones we have caught have mostly gone into a pot for stock.

It turns out we have been getting it wrong because pollock were on the menu at Isaac At on Saturday night and were one of the best things we ate. The fillets had been covered in salt and wrapped up in clingfilm for a few hours. The salt had drawn off some of the moisture and firmed up the flesh so once it was cooked it just held together.

The pollock came almost halfway through a meal that started with a a crisp fried salad leave laid with small pearls of taramasalata and pickled kohlrabi, then carrots done three ways followed by lamb, chicken and then a quince and apple sorbet and culminating with poached pears.

None of those descriptions do the food justice. Hopefully some of the pictures do. 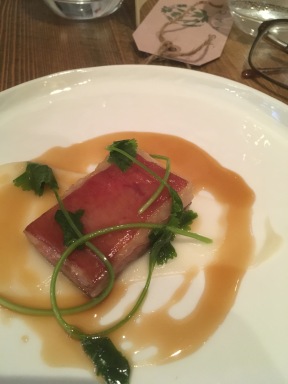 Following the meal me and the son went to a local pub to drink beer and watch as people shuffled to Chic and other disco music.

He then went off to have a good time and I went to bed knowing that fate had conspired so that I was going to have to share a bed with him. He duly woke me up with a smile at 4.30 in the morning complaining that his sister had made him leave wherever he had been early just as he was starting to have a good time.

I went back to sleep and dreamed of graffiti and bright orange bomb going off of the carrots.

2 thoughts on “Pollock at Isaac At”