The house is now a quieter place. The eldest two children have gone back to university and the rest of us need to fall back into a different rhythm.

There are of course advantages, the likelihood of being swept up into a bear hug by the nineteen year old son are substantially reduced and the general level of screeching has been reduced.

The final family meal was Friday night. I had planned a feast of falafel, lamb, pitta and miscellaneous tapas but was told that one of our number didn’t like falafel, never had done, and I would think again.

So I suggested beans with guacamole, fried chicken, wraps and tacos. This got a more positive response provided the beans were better than the ones we had for a Sunday breakfast in Brighton a couple of months ago. I hadn’t had the beans but I was told this would be a tall order.

I started with the beans. I cribbed part of the recipe from the  Brindisa book on Spanish cooking I was given for Christmas.

An onion was finely chopped and cooked off in olive oil until soft and golden. Crushed garlic and chopped chilli was added together with a large roasted red pepper, also finely chopped and finally a fresh bay leaf. Once all that had taken on some colour a couple of tins of chopped tomatoes were stirred in and it was all brought to a simmer. I then stirred in three tins of haricot beans and seasoned it all with plenty of salt, pepper and paprika. It was a left to cook for an hour so whilst everything was put together.

Chicken breasts were put on to fry in oil with salt, pepper and more paprika. As they cooked in a sliced onion and pepper were thrown in. Once the chicken was done I sliced it up and stirred in some Mole sauce (a Mexican chilli sauce made with chocolate) at which point it seemed like a good idea to stir a teaspoon of the Mole sauce into the beans. I loosen the chicken up with a glug of beer.

Finally I made the guacamole. Four avocados were mashed with a wooden masher. A finely chopped red onion was stirred in along with chopped tomatoes (if I had been doing it properly I should have skinned a deseeded the tomatoes – but most days I think life is too short for the skinning and deseeding of tomatoes), crushed garlic, chilli, lime juice, olive oil, a dash of tabasco and more salt and pepper.

We ate it all with wraps and tacos, grated cheese and salad, hot chilli sauce and cooling yogurt.

The kids seemed to enjoy it although I never got to hear if the beans were better than the ones we had in Brighton? 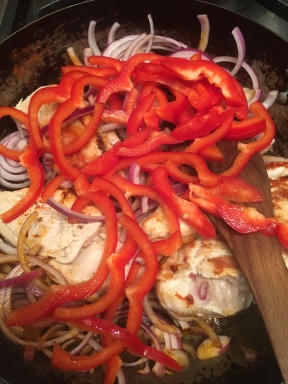 Once the food was eaten they started on the packing for journeys down south.