So I have just spent a weekend in the Cottage with my Dad and two brothers-in-law.

We more or less survived and came out of it all still talking to each other. Although there was a moment late into Friday evening/ Saturday morning after Whiskey had been drunk and another bottle of red was in the process of being opened and the voices around Trump and Brexit hit a crescendo when that could have been thrown into doubt. Fortunately whatever doubt there might have been was gone on the Saturday morning as the sun came out and a petrol driven hedge trimmer put in an appearance.

The highlight of the weekend came an hour or so after breakfast (bacon and black pudding) that Saturday morning. I had washed the dishes and for a moment looked unemployed. That didn’t last for long and I was given the job of ridding a wall of ivy. This was one of those jobs were there a fine balance to be had between doing the job at hand (i.e.removing ivy) and complete disaster  (i.e. removing those last bits of ivy that were in fact holding the whole wall together and to have it collapse on top of me).

Out of the corner of my eye I saw Tommy’s red van at the head of the pier. I left the wall to it and went over to say hello. We talked for a while and he then got out of the van and led me to the doors at the back. From there he extracted an older plastic paint container stained with the history of many years of fish. It was full of prawns, shrimps and Dublin Bay Prawns. he wouldn’t take anything for them and so I turned my mind from the wall to lunch.

We had had some Dublin Bay Prawns the previous evening – split and slathered with olive oil, garlic and chilli and roasted. We needed something different for lunch. There had been complaint as to the lack of mayonnaise the previous evening and so the solution presented itself. The sun was out so we would have the prawns cold with garlic mayonnaise.

The large silver pan was filled with water from the rock pools and put onto boil and I went to work with a couple of eggs and some olive oil.

The egg yolks were mixed with squashed garlic and oil was added as the twin blades of a mixer conjured it all up into a thick heavy garlic sauce.

By the time it was ready the water was boiling. I had found half a dozen crab claws amongst the prawns so they went into the water first for a good ten minutes. They were fished out and refreshed under cold water as the Dublin Bay Prawns cooked. They only needed a couple of minutes before being fished out going through the same process as the crab claws.

The prawns went next and took less than a minute to cook.

All was then arranged on plates and we ate them with bread, the garlic mayonnaise, pints and good wine. 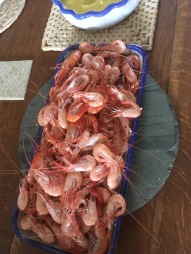 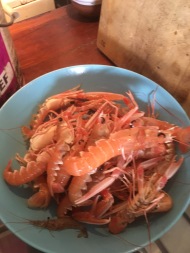 It was a very good lunch. Almost as good as the sunset. 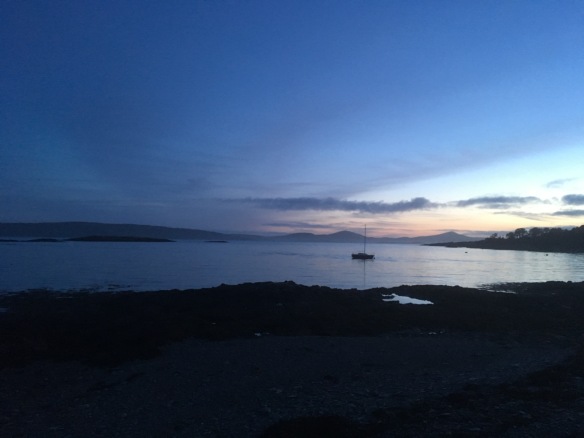