Saturday morning I was stood at the counter at Ward’s Fish looking for red mullet. The original intention had been to buy something to cover in bread crumbs and deep fry but as I made my way down to the market I persuaded myself that if they had red mullet then we would have that instead. At first I couldn’t see any so I let my eye wander to where the white fish lay on the ice but then I caught sight of a flash of golden pink. There was only the one of them but it was big enough to feed four.

I asked for it to be filleted and turned my mind to how I might cook it. On the way back to the car I regretted not keeping it whole. It had been big enough to roast in the oven. No matter. I would roast it anyway.

That evening I par boiled some potatoes. When they were done I sliced them so they were as thick as a thick pound coin, doused them in olive oil and put them in a pan in a hot oven. As they continued to cook I sliced up a mixture on red onions, tomatoes and lemons which were tossed with crushed garlic, olive oil and more lemon juice.

I gave the potatoes a stir after 20 minutes as them were just starting to take on some colour. After another ten minutes I covered the potatoes with the onion tomato mixture before giving it all a gentle stir and putting it back in the oven. After another ten minutes I laid out the two fillets of red mullet on top of the softening onions and tomatoes. It was all given a good slug of olive oil and plenty of salt and pepper before going back into the oven for about 12 minutes.

Sunday and the sun was out and so time was spent rearranging pond life, admiring my garlic

and artichoke plants before planting seeds and drinking a beer in the garden.

Sunday evening and we ate a sweet curry listening to blissed out funk jazz. 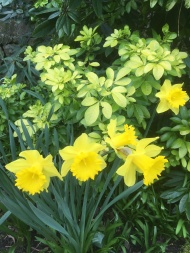 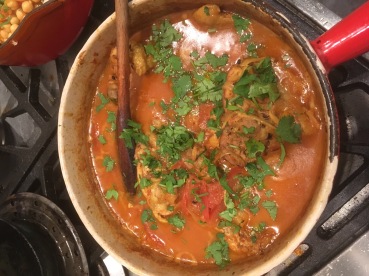 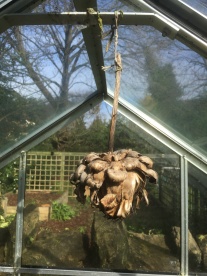 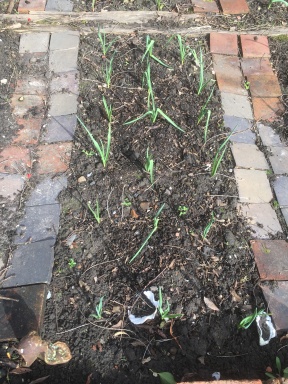