Second Saturday of the month so it was time this morning to make my way to New Ferry and The Farmer’s Market. I got there early with half a mind to buy an Ox-heart for my sandwiches next week but there wasn’t one to be had. I was tempted by a very large rib of beef but that seemed a bit extravagant for just Galen and myself so rather boringly I bought another free range chicken for roasting tomorrow. We’ll have it with roast potatoes, veg and gravy. The veg will include green curly kale from the garden who taste should be sweetening touched as it has been by first touches of frost these last few mornings.

I bought a combination of Cheshire & Lancashire cheese for cheese on toast for lunch and my eye was then caught by some partridges, £3.99 each or four for £10.00. I wasn’t sure if I needed four partridges but the man then offered to exchange two of them for two teal which were about the same size.

I had one of the teal for lunch. It took just twenty five minutes to cook in a hot oven basted with a drop of olive oil and seasoned with salt and pepper When it came out of the oven I pushed a piece of hard bread into the cavity to soak up the dark juices that had gathered there.

The meat was dark, the colour of liver, and there were small bones to chew.

The kids stared as they ate their cheese on toast. They could tell they were missing something.

We have been listening the National and Phosphorescent.

It is the second Saturday of the month so it is time for another drive over to New Ferry and Wirral Farmer’s Market. There are a number of different ways to get there. this morning we went via Birkenhead and up Whetstone lane past the new St Catherine’s Hospital. As I drove I kept looking over my left shoulder for the view through broken down houses over to Liverpool, the two cathedrals rising up over the City and the river and all the new development that runs along side it. Although Tranmere is only a mile or so away it feels and looks like another country.

We got to the market and bumped into friends who were leaving and said that they had got there late and some of the stalls were running out. I bought myself my usual free range chicken. They only had small ones. Apparently the cold weather over the last few weeks has slowed down their growth.

Then it was off to buy some tongue. I had seen some last month but put it to one side and bought myself an ox-heart instead. This time I was determined on tongue. The same butchers had them. Great hefty things over a foot long and six inches wide. Rather than buy it there and then and have to carry it round I put it back whilst I finished the rest of the shopping. We bought bread, small pastries stuffed with feta cheese, spinach and potato and a big bag of potatoes to last us the month. Walking round there was another stall selling buffalo meat. He had tongue as well which looked smaller and more manageable.

‘Good pet food,’ he reassured me when I ask how much.

‘Boil and skin it,’ a lady standing next to me advised.

Back home I made up stock with the bone from the ham we had last night and the giblets from the chicken. The tongue has been cooking in that for a couple of hours and is now cooling down. Eldest daughter is complaining about it being disgusting and she has now been put of food forever.

Lucky I didn’t get the pigs ears I spotted – also 50p each.

Muntervary, or Sheep’s Head, is a bold rocky headland, facing the Atlantic Ocean, which divides the entrance to Bantry Bay and Dunmanus Bay, and is the extreme western point of the peninsula of Mintervauria , otherwise Minster-Vauria, The House of the Friend of Mary. The signal tower at the Sheep’s Head is 774 feet above sea level. The rocky cliffs of this headland are exceedingly wild and grand during a storm from the west, when huge waves from the Atlantic are dashed against it with tremendous force – the spray from which descends a considerable distance inland, like a fall of snow. The eagle builds its nest in the Sheep’s Head cliffs, of which she has undisturbed possession; and many a hare and young lamb finds its way to the lofty and inaccessible eyries. Tourists who follow the routes pointed out in guide books have not the slightest idea of the grandeur and beauty of West Cork coast scenery.

A remarkable character formerly lived in the Sheep’s Head district, and is not many years dead. He lived to the great age of ninety-six years, and was well known for three quarters of a century as the King of the West. I have often conversed with him, and heard him relate how he watched, when a boy, the French fleet sailing up Bantry Bay. King Tobin, or the ‘King of the West’, although uneducated, was a very intelligent, shrewd, honest man. He was one of Nature’s noblemen. His son, the present King of the West, a P.L.G. of the Bantry Union, farms extensive tracts of land which have been held by his ancestors under the Evanson family, for generations.

The mountain range, which extends from near Durrus to the Sheep’s Head, and forms the backbone of the Peninsula varies in height from 600 feet to 1,049 feet above the sea level. Rosskerrig Mount, a little to the north-east of Kilcrohane, is 1,049, and South Killen, near Ardahill, is 1,029 feet above sea level. On reaching the summit of this mountain from Kilcrohane there is one of the grandest views in the United Kingdom; I doubt if there is anything to compare to it.

At your feet is that magnificent sheet of water forming Bantry Bay; to the west is the broad Atlantic, Dursey Head, Berehaven mountains, Castletown, Bere Island, the splendid and safe harbour of Berehaven, Rouncarrig Light-house, Adrigole, Glengariffe, Whiddy Island etc; while in the back ground you have Hungary Hill, the Sugarloaf, Esk Mountains, Magillicuddy’s Reeks, Mangerton etc, etc, the whole forming a grand panorama, with an endless variety of light and shade reflected on the mountains.

Turning around you have the view of another beautiful sheet of water, forming Dunmanus Castle, Three Castle Head, Mizen Head, Brow Head, Cashelenne, Mount Gabriel, and Cape Clear, filling up a bold, rugged and picturesque back ground. How many people, born within twenty miles of this delightful scenery, who have an idea that there is such a place as I have attempted to describe in Ireland. In the reign of Elizabeth there was an Act of Parliament which prohibited any person going abroad unless he had a thorough knowledge of his own country. Such an Act would, no doubt, be beneficial elsewhere. From a series of articles that appeared in The West Cork Eagle (the Skibbereen Eagle) in 1872. 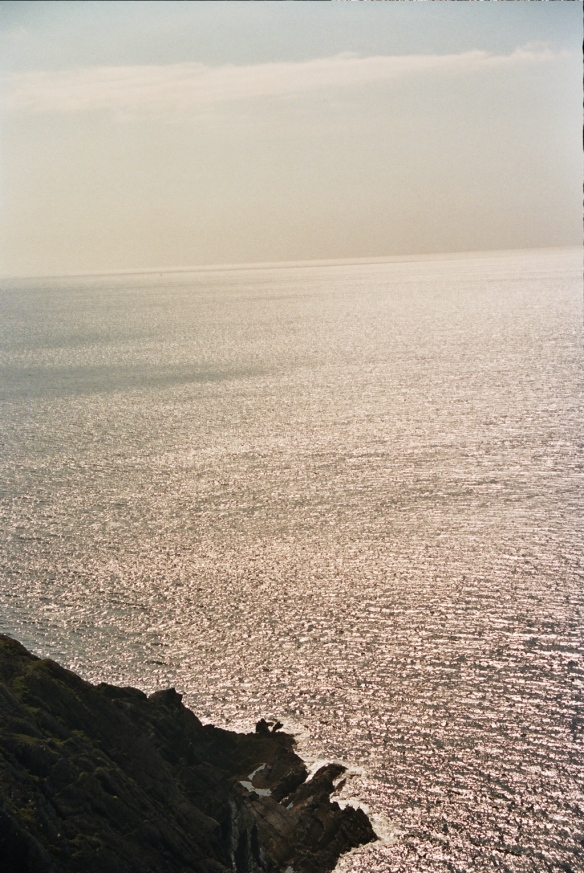 So far we have managed 12 hours without Mum. Kids are up and claim to have done homework and one of them is banging round the house in need of exercise and something to do. The other two are reading books and the paper listening to a lover’s rock compilation I picked up some months ago and managed to forget about.

So for supper this evening we had Swedish Meatballs. The idea was that they should supplant themselves in the kids affection over and above whatever meatballs they had in the cafe in Ikea one evening.  The recipe came from Simon Hopkinson and his book of forgotten food I wrote about a few weeks ago.

The girls toyed with them, ate one meatball and all of the chips and said they had had enough, Galen had the five meatballs I gave him and then finished off whatever the girls had left. Boys may be a pain in the backside but there is a good point to them when it comes to the hoovering up stakes.