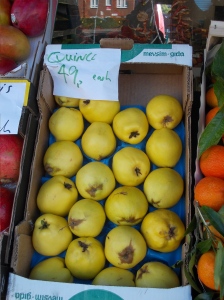 There are quince in the greengrocers on Oxton Road.. I was in there first thing and as I walked out Kazim pointed them out to me. i bought just the one  but then as I drove over to The Farmers’s market in New Ferry I convinced myself that one would not be enough and a half dozen or so would look good in the kitchen until I got round to cooking them. 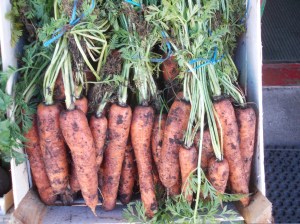 So I stopped again at the greengrocers to get me a bagful. The had some giant pomegranates which looked too good to resist so I took one of those as well.

Having put them into the basket I wemt round the back to let Kazim know I was getting them.

He was sat with Nadir at a rickety table having lunch. There was a small shelf with a kettle and some pots and pans for cooking. They had plates of vegetable and rice stew which they were eating with bread. Kazim invited me to have a taste and he explained how he made it with kohlrabi, onions,carrot, turnips fried in olive oil. Once this had started to cook he threw in a good handful of rice and then water. He had to keep stirring it to stop it from sticking and burning. Shortly before it was ready a couple of peeled tomatoes were stirred.

He put two spoonfuls on a plate for me and flavoured it with soy sauce and olive oil. It was very good. i must try and get there foir lunch next week.

As it was lunch had been bought at The Farmers Market. Two packs of lamb chump from Bryn Cocyn Farm.

I cooked the same potato cake I had cooked last night except this time it was for two. The turning over with a plate worked perfectly again.

The lamb was fried off in olive oil having been seasoned well with salt and pepper. Just before serving I stirred in some finely chopped lemon peel, parsley and garlic. 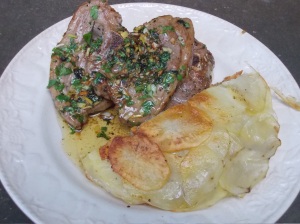