One of my favourite dishes. I had it last week in Morito – a small terracotta dish of spiced lamb, aubergine, yogurt & pine nuts. When it came there some pomegranate seeds on top as well. It was delicious the raw taste of garlic mixed with the smoothness of the aubergine and the slight crunch of the fried lamb, the nuts and the seeds.

I first made something like aubergine and yogurt when were living at 72 East Avenue in Oxford. I think it might even have been for the party I had for my 30th birthday. I have been trying to remember from which book I got the recipe. Going through the shelves I think that it must have been from either Claudia Roden’s book of Middle Eastern Food or the BBC book she did on Mediterranean Food.  Properly the dish is called either Baba Ghanoush in Arabic با غنوج or Moutabal   and I am sure that I read somewhere that one the translations has something to do with the harem.

The recipe out of the Mediterranean book is almost exactly the same as that set out below save that Roden adds lemon juice and tahini paste. There is no yogurt in the version out of her Middle Eastern book.

The important things are to have the smoky flavour of the the creamed aubergine and the raw brute taste of garlic to offset the smooth texture on the tongue. 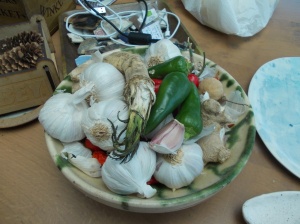 Take two good aubergines, pierce the skin with a sharp knife, and place them under a hot grill. If it is summer and the barbecue is going put them on the rack. It doesn’t matter if the skin gets burnt and charred as you will not be eating that. Depending on the size of the aubergine they will take 45 minutes to an hour. Turn them over every so often until they are cooked through and the flesh gives when poked with a finger.

Take away from the heat and allow to cool so that they can be handled.

Whilst they are cooling crush a couple of cloves of garlic in salt. I use a large heavy bowl and a wooden pestle to do this.

Take up the sharp knife again and split the aubergines lengthwise. The pale cream coloured flesh should be soft and forgiving. Scrap it out with a spoon and add to the bowl with the garlic. Then using the same pestle break up the flesh until it takes on the consistency and smoothness of a thick double cream. Stir in a few good teaspoon of yogurt to temper some of fire of the garlic. You could also add some olive oil if you wanted. Check the seasoning and add some salt and pepper if you think it needs it.

Put into a serving dish and eat with flat bread warmed in a large frying pan.

You could decorate the dish with pomegranate seeds or pine kernels and perhaps some finely chopped parsley.

This evening we have been listening to a new compilation from Jonny  Trunk called Lard. 70 minutes of weird strange folk, jazz and nursery rhymes all wrapped in some Seventies Sainsbury packaging for Lard! 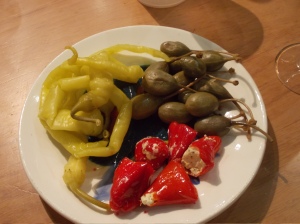